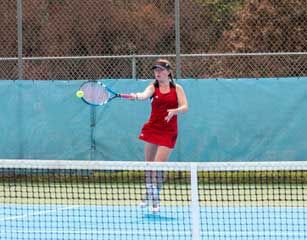 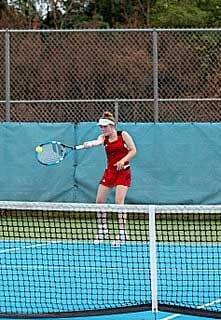 The Amery girls tennis team earned a 7-0 win over Ashland in a triangular it hosted Sept. 11.

“The Warriors played well against Ashland,” said coach Tanya Julson. “It was good to get some competition this weekend. We are heading into the final and toughest part of our season before tournaments and we need to stay sharp to help us finish strong.”

Amery also played Rice Lake in the triangular and fell 5-2.

Julson explained they moved up its No. 2 and No. 3 singles players and gave Marissa Fisk, a top junior varsity player, a shot at No. 4 singles.

“Each match had tie breakers for either the set or the match,” Julson said. “It really comes down to a couple points and those two players would have won. It is fun to watch the girls learn and make adjustments throughout their match.”

Altoona swept all three doubles matches plus the win at No. 1 singles to win the match Sept. 9.

“Altoona has a strong team with a lot of depth,” said Amery coach Tanya Julson. “The Amery players worked hard and made them hit many balls. It was nice to have some good competition to help us improve.”

Unity/Luck didn’t have a full team, which caused some adjustments for Amery in its match Sept. 2.

“I sent my juniors to play this match,” Amery coach Tanya Julson said. “They did a fantastic job and brought home a win for Amery.”