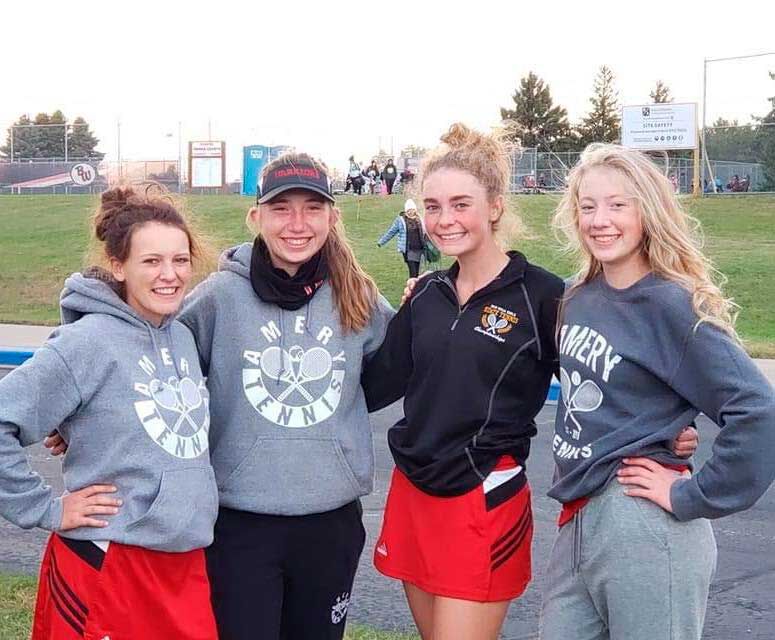 Hannah Bottolfson was the section champion at No. 2 singles. She brings a 15-1 record to the State meet. Her first round opponent will be St. Mary Catholic’s Anna VandenAcker (9-7). The match is scheduled for sometime Thursday morning.

Sophie Whitley (13-5) finished second at sections at No. 1 singles. Her first round opponent Thursday morning will be Racine St. Catherine/Racine Lutheran’s Kate Smith (15-2).

The Division 2 Individual Tournament is scheduled for Oct. 15-17 at Sports Core in Kohler.

Whitley beat Lakeland High’s Maria Gironella 6-0, 6-0 in the first round. She then defeated Regis’ Arianna Smith 6-0, 4-6, 10-7 in the semifinals. Newman Catholic’s Becky Larrain defeated Whitley 6-4, 6-4 in the sectional final.

Bottolfson and Whitley were joined at sections by fellow singles players Lily Marquand and Ashley Benysek.

“These four girls had a phenomenal day of tennis,” said Amery coach Tanya Julson. “They showed grit and perseverance as they battled for each point. One fan counted a rally that Ashley won that lasted 99 shots. This kinds of patience and consistency was shown by each player when needed.”

The Warriors finished second in the section behind Regis, who qualified for Team State Oct. 24 in Kohler

Amery advanced all four singles players to sectionals based off of subsectional results Oct. 5 in Baldwin.

The four of them went 7-0 in matches that day.

The doubles teams weren’t as fortunate.

Ella Gould and Lidia Curtis at No. 3 doubles won their first round match against B-W’s Camille Bennis/Alayna Brightbil, 2-6, 6-2, 6-1. Regis’ Lauren Seeman/Abby Erickson then eliminated the pair in the next round 6-3, 6-0.

“The team ended the day tied in second place with Rice Lake,” Julson said. “The team played great despite extremely windy conditions. It has been a fantastic season.

“I am so grateful all the girls have had the opportunity to have fun, play, and be successful.”