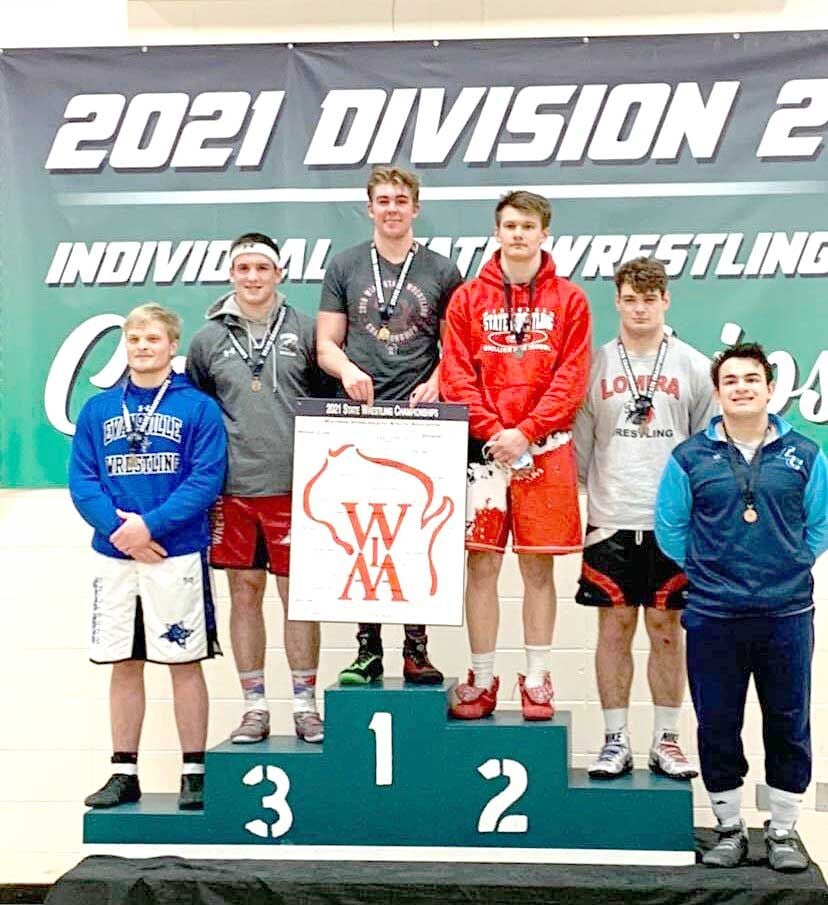 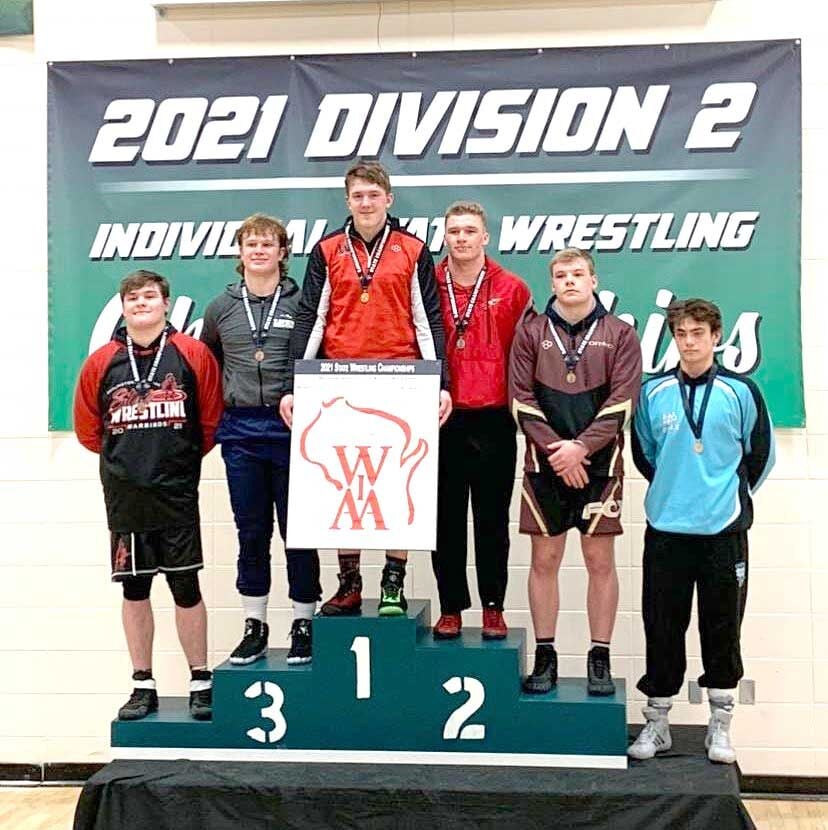 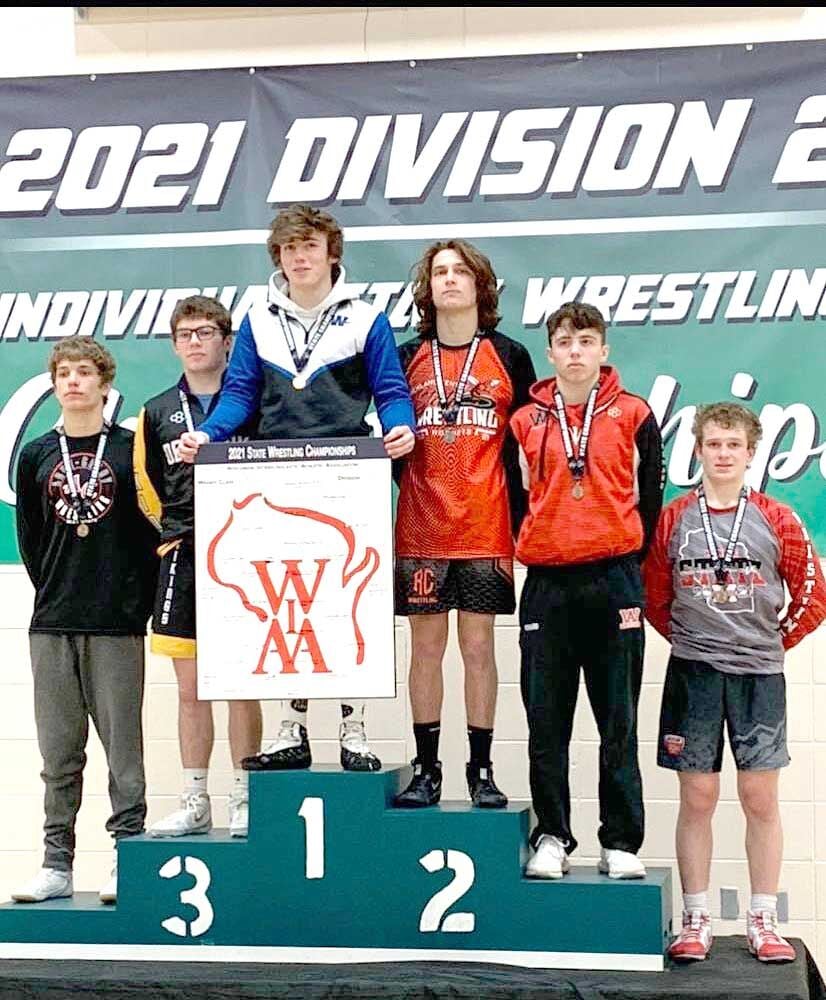 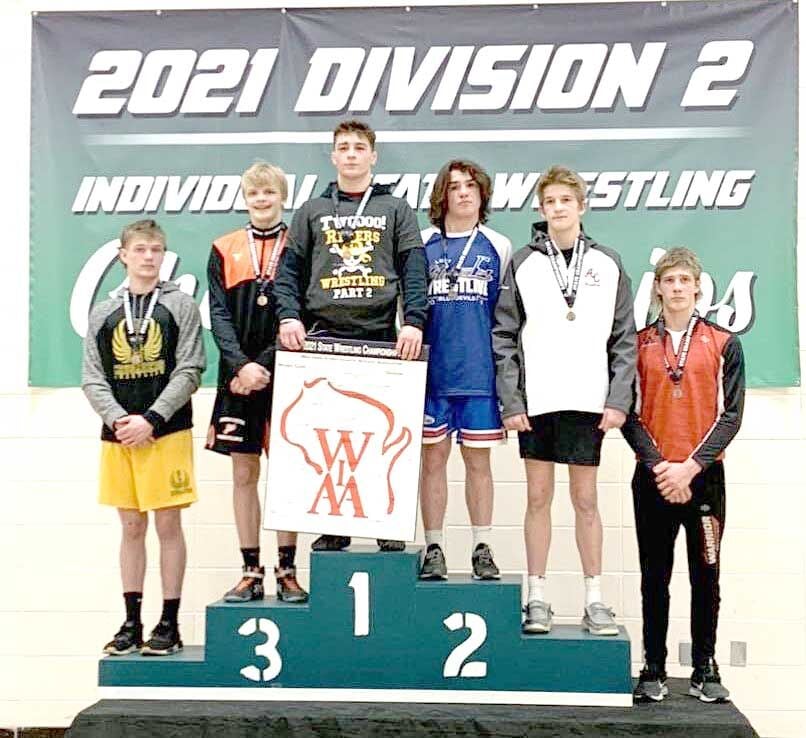 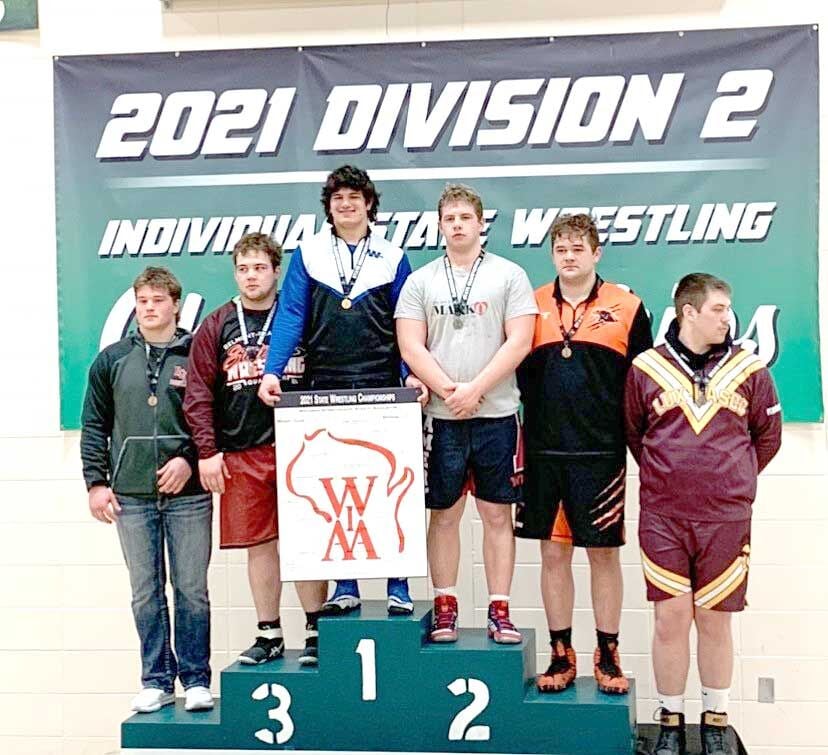 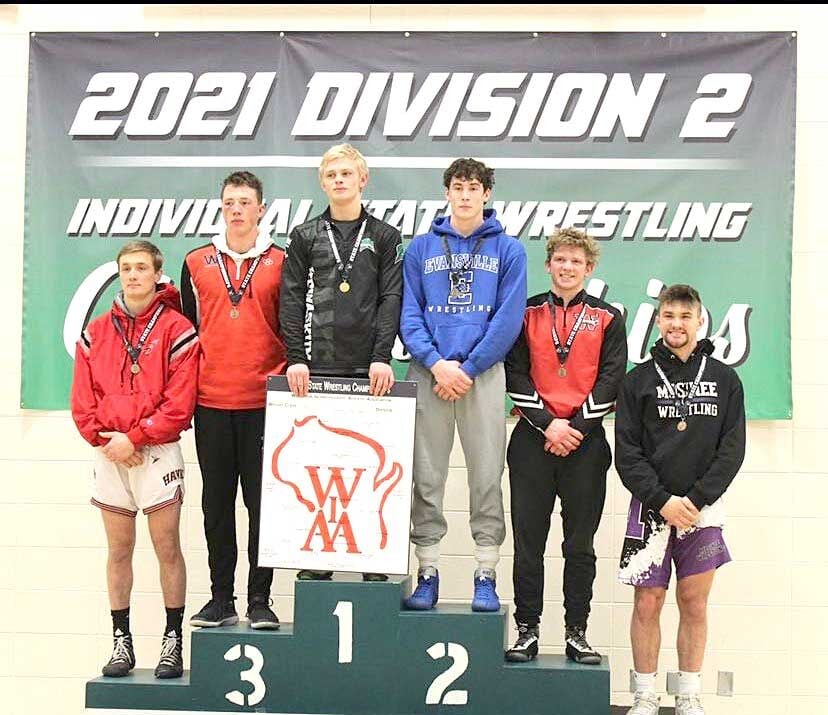 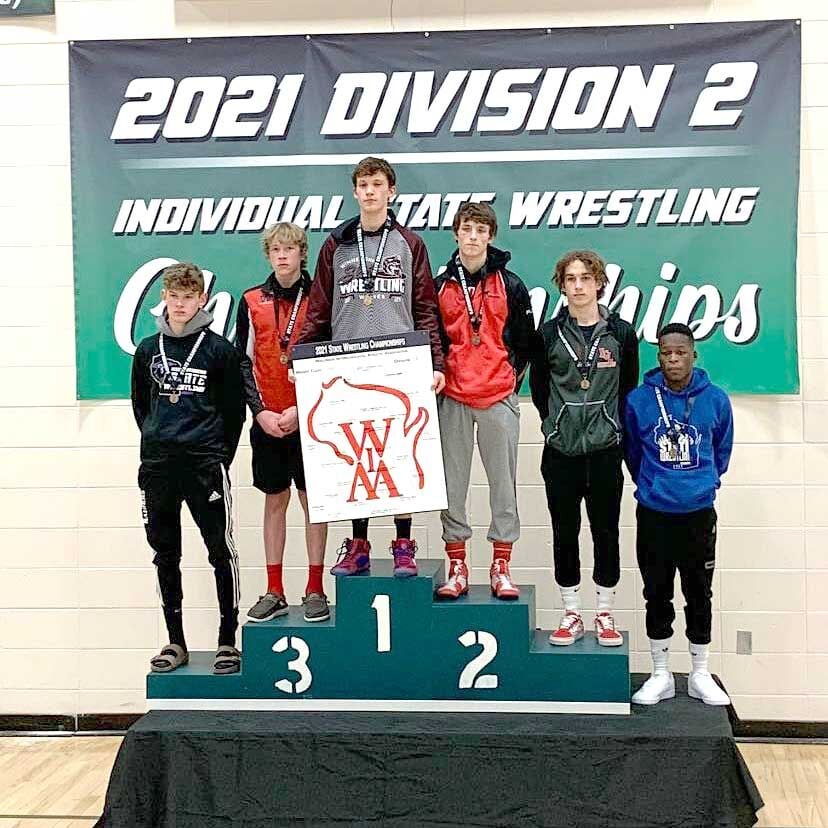 The Amery wrestling team has been one of the top teams in Division 2 all season long.

For those who had any doubt about its potential, they were quieted Saturday at the WIAA State Individual meet at Adams-Friendship High School.

The Warriors brought seven wrestlers to State and all seven of them reached the medal stand.

Kale and Koy Hopkes are the latest state champions to the Warriors’ honor roll.

Kale was looking for a state title in his third trip at the state meet. He earned a 10-1 major decision over Adams-Friendship’s Anthony Kujawa in the quarterfinals at 195 pounds. He then pinned Little Chute’s Mathew Janssen in the semifinals. He then continued his undefeated season with a 5-0 decision over Brillion’s Sam Galoff in the championship. In his previous two trips to state, he went 1-2 at 160 pounds in 2019 and was sixth at 195 pounds last year.

In his first state tournament, Koy wrestled only three matches at 220 pounds as well. He started with a pin over Ripon’s Aaron Socha in the quarterfinals in only 36 seconds. The semifinal match with Omro’s Kyle Dietzen lasted a little longer, but had the same result – a pin.

His final match saw a familiar foe – Baldwin-Woodville’s Max Ramberg. This was the fourth time the two wrestled this season and just like the previous three, Koy was the victor. This time it was a 6-4 decision. Koy remains undefeated on the season.

The Hopkes weren’t the only Warriors to reach the championship.

Robert Beese at 285 pounds eared a pin over Catholic Memorial’s Josiah Nathaniel and a 9-2 decision over Luxemburg-Casco’s Travis LeGrave in the semifinals. Wrightstown’s Quincy Klister ended Beese’s dream of a state championship as he defeated him 5-1.

Walker Ingham concluded his fourth trip at state with a third place finish at 160 pounds. He started his state tourney run at 160 pounds with an 8-5 loss in the first round to Mosinee’s Gage Coppock. Ingham rebounded to defeat Delavan-Darien’s Owen Chelminiak and Baldwin-Woodville’s Sam Crowley in the wrestle backs. The third place match saw Ingham blank Whitewater’s Carter Friend 3-0. Ingham is now 19-1. In his previous state tournament trips, Walker placed fifth at 145 pounds last year, third at 126 pounds in 2019 and lost his first match at 106 pounds in 2018.

In his first trip to state, Wyatt Ingham also placed third at 120 pounds. He fell 5-2 to Seymour’s Wyatt Kaczrowski in the first round. And just like his brother, Wyatt won his two wrestleback matches – a pin over Prairie du Chien’s Ryder Koening and a 5-2 decision over Kiel’s Eyan Dessellier. Wyatt wrapped up his state tournament run with a 8-0 major decision over Neillsville/Greenwood/Loyal’s Derek Zschernitz

Jordan Penard was making his third trip to state. His previous two trips were fourth at 132 pounds last year and third at 113 pounds in 2018.

This year’s run started with a 7-4 decision over Monroe’s Brady Schuh. He then fell 7-1 to Wrightstown’s Kaiden Koltz in the semifinals, but rebounded to pin Abbotsford/Colby’s Tanner Halopka in the wrestleback. Ethan Schwartz of Denmark defeated Penard in the third place match.

Mason Tylee concluded the Warrior wrestling lineup with a sixth place finish at 145 pounds. This, too, was his third trip at state after losing his first round match the last two years.

Tylee avoided the first round curse this year thanks to a 7-4 decision over Racine St. Catherine’s/Lutheran Catholic Central’s Henry Amborn. He was then defeated in his final three matches.

The Warriors paced the field in the team scoring completion of the event with 107 points. Fellow conference rival Baldwin-Woodville was second with 62.

Given the results, head coach Mike Kelly was one happy man afterwards.

“I felt it went very well, getting all seven to place was awesome,” he said. “Getting to Hopkes to win state titles and Beese to be a runner-up is a huge motivation factor for team state.

“The Ingham Brothers both getting third places showed our toughness. Jordan had a great tourney placing fourth, and Mason placing sixth.”

There was one more event left for the Warriors this season. Team State is Saturday back at Adams-Friendship High School. The Warriors earned the number one seed.

Their opponent will be fourth-seeded Kiel with Winneconne and Prairie du Chien dueling in the other semifinal. Semifinals start at 10:30 a.m. The final will begin 20 minutes after the semifinals conclude.

“Amery is the best conditioned and toughest team in the state of Wisconsin this year and Saturday we are going to prove it,” Kelly concluded.