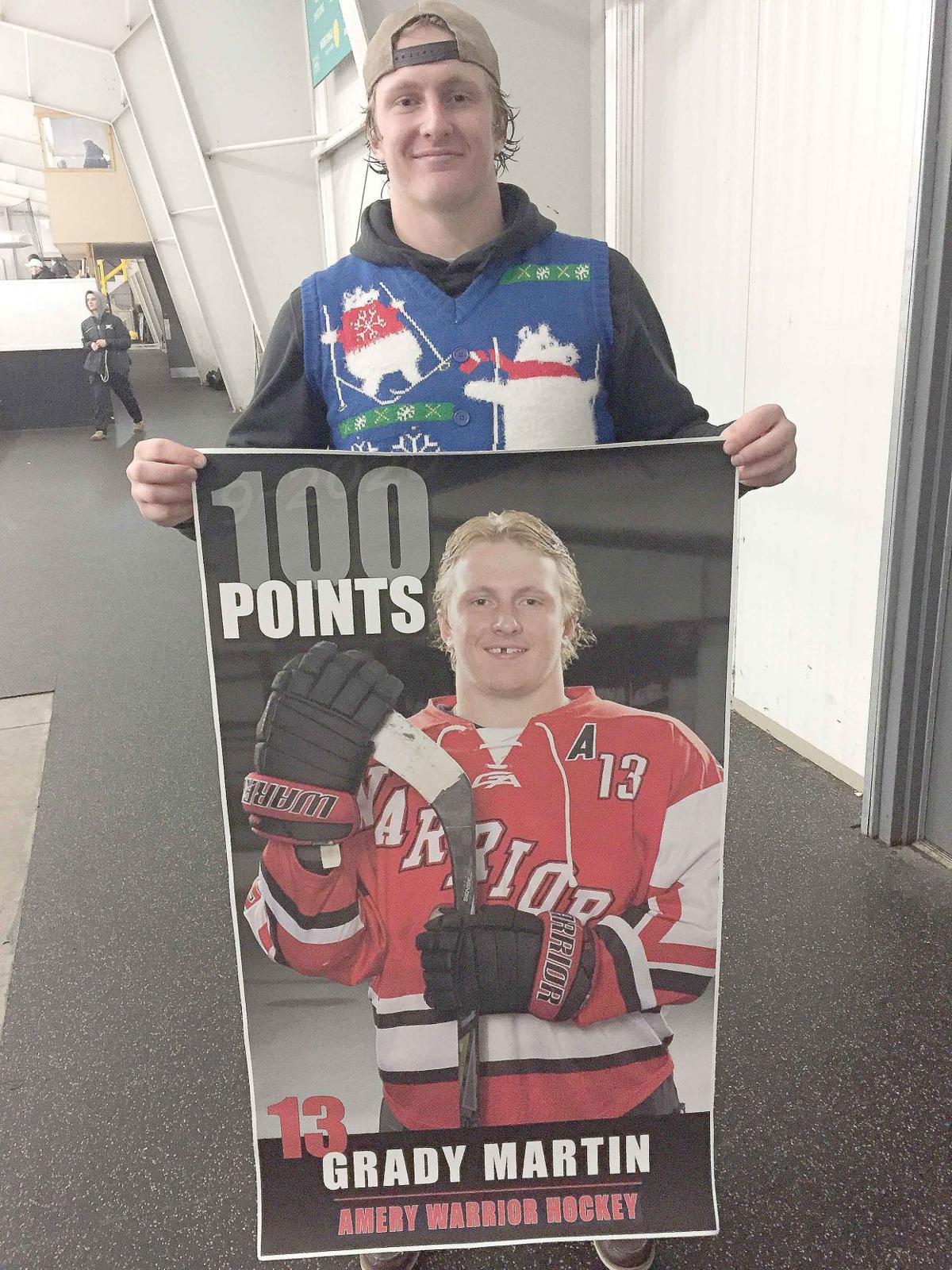 #13, Grady Martin scored his 100th point during a hockey match-up between Amery and the WSFLG Blizzard. The Warriors celebrated an 8-2 victory including Martin’s two goals during the December 26 Barron Tournament game. 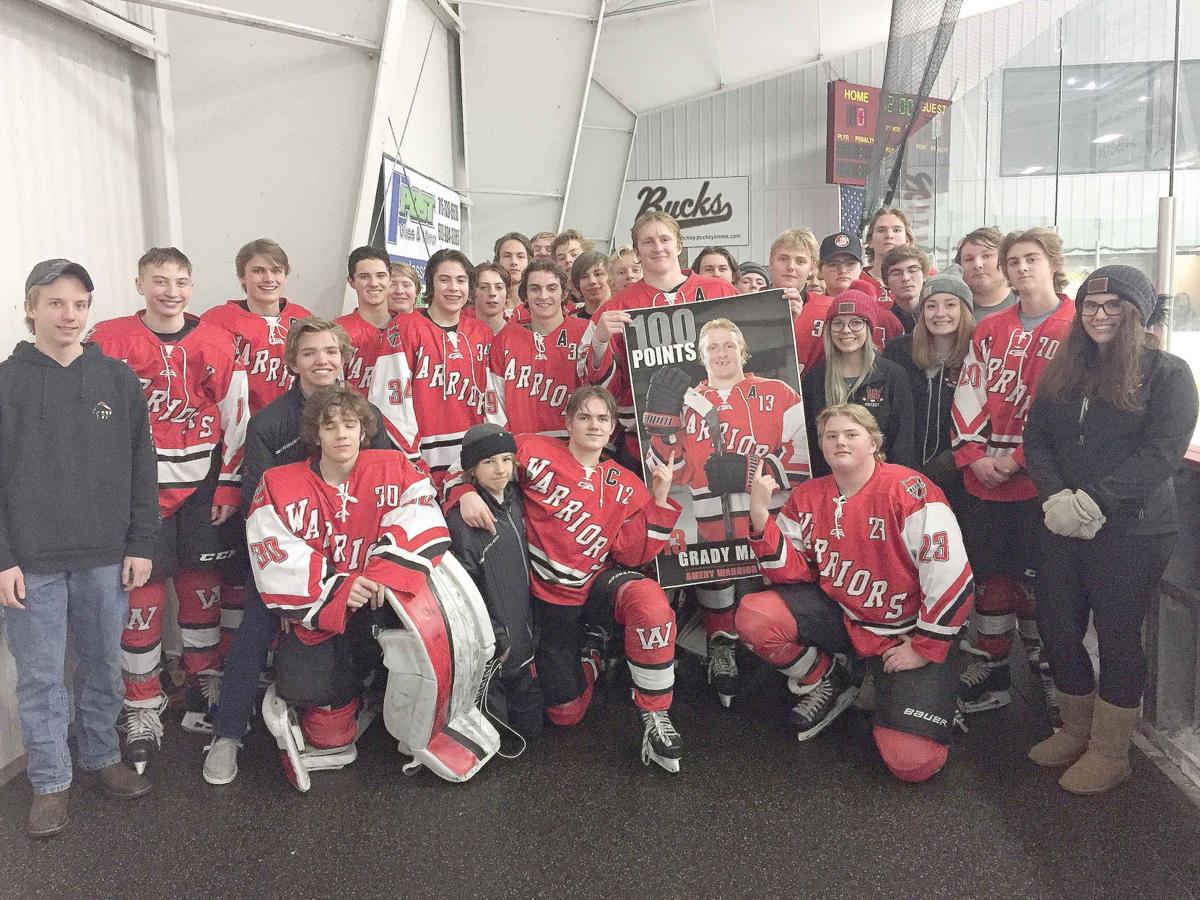 Grady Martin is shown with hockey teammates and fans after reaching the milestone of scoring 100 points.

#13, Grady Martin scored his 100th point during a hockey match-up between Amery and the WSFLG Blizzard. The Warriors celebrated an 8-2 victory including Martin’s two goals during the December 26 Barron Tournament game.

Grady Martin is shown with hockey teammates and fans after reaching the milestone of scoring 100 points.

A small group has a new member. Formally having a membership of only six, Amery’s Grady Martin has scored his way to 100 points to sit next to Ryan Humpal, Matt Mullendore, Tanner Tryggestad, Kyle Schultz, Jake Mullendore and Jackson Henningsgard.

Martin started playing hockey at three-years-old. He said, “My favorite thing about hockey is intensity during every game. A lot of the times, games are decided on one lucky bounce of the puck, and you won’t really know what way that puck is going to bounce until the last second clicks off the clock.”

Martin gets in the right mindset before each ice battle for his best clench at success. “I get to the rink early just to settle in and get my mind focused, never going on my phone an hour before the game. Next up I play a game of tips with the team and then go through a ladder workout. I suppose one of the weirdest things I do to prepare is tying my skates and then walking around for at least five minutes while constantly adjusting my skates to make sure they are the exact same tightness. After that, I finish getting dressed and I’m ready to go,” he said.

Martin shared he has always been a superstitious person. He said, “I wear the same socks and shirt for every game. I re-tape my stick every game because my long-time coach Kyle Shultz told me once when I was younger that that was how you score a lot of goals. Before every period I tap my stick on the floor, wipe the front of the blade, flip it, wipe the back, and then tap it on the floor again. Not sure why I do that, but its like I’m trying to wipe away the bad juju. The last thing I do is tap the sign outside the locker room that says, ‘It’s all heart from here’ just as a last motivational action before taking the ice.”

When it came to reaching the 100-point milestone, he wasn’t sure if any amount superstition work was going to get him there. “In all honesty, I was a little worried I wouldn’t reach it. I have been playing forward for all three years of high school, which has helped me get closer to the 100-point mark, but this year, I was moved to defense after losing one of our best defensemen last year. But everything came together in the end, and I was able to get my hundredth point,” Martin said.

Martin is a real goal getter who also plays football and baseball. He said, “My parents are probably my biggest fans. They have supported me in my hockey career every step of the way and I am extremely grateful for that.”

He is a senior at Amery High who says his favorite thing about the school is the tight-knit group of people he has grown up with. “It is a different bond with a group of people when you’ve been going to school together since kindergarten and there are not many people in the school.”

When it comes to the little town in which he has grown up, he said, “I love the small-town feel. It isn’t like huge towns where you could walk into a store and not recognize anyone. In Amery, you can go up to almost anyone and start up conversation like you’ve been friends forever. All of my friends and I can get together within 15 minutes and go have a lake day or go out to eat.” Even though his plans after graduation include attending Mankato State University to be a Nurse Practitioner, Martin said, “I’ve always been a small-town guy. Amery is home and it always will be no matter where life takes me.”