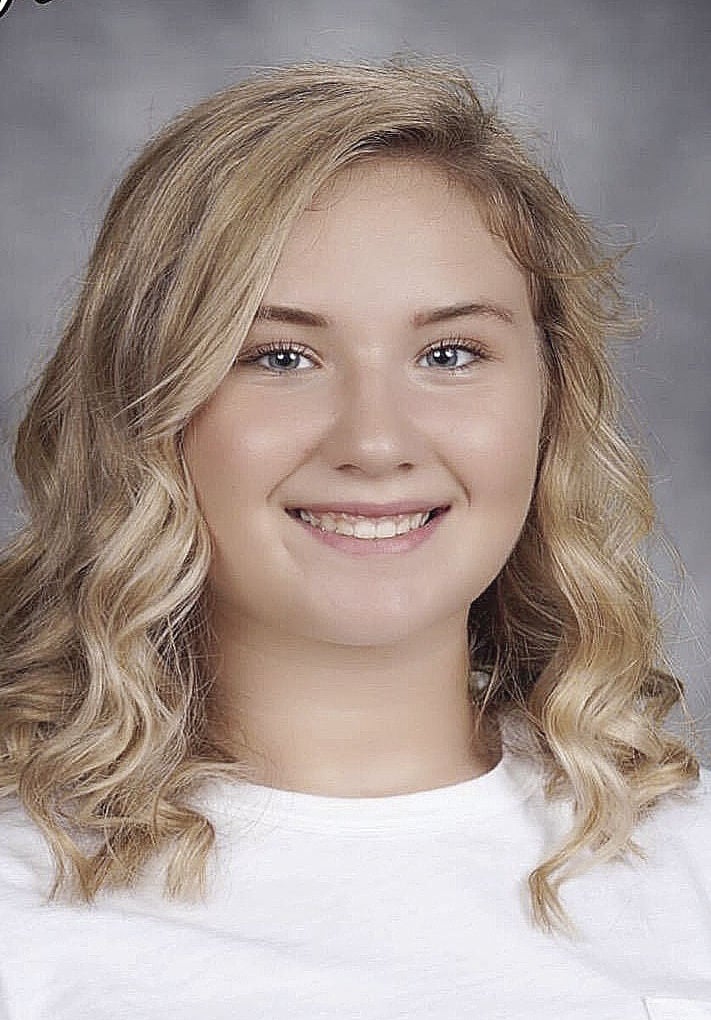 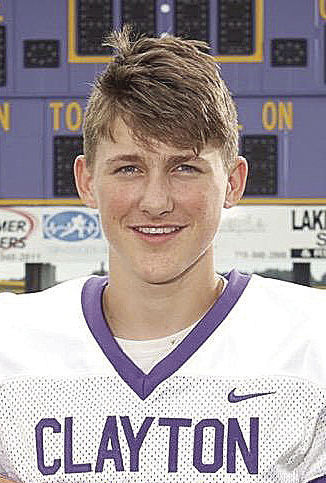 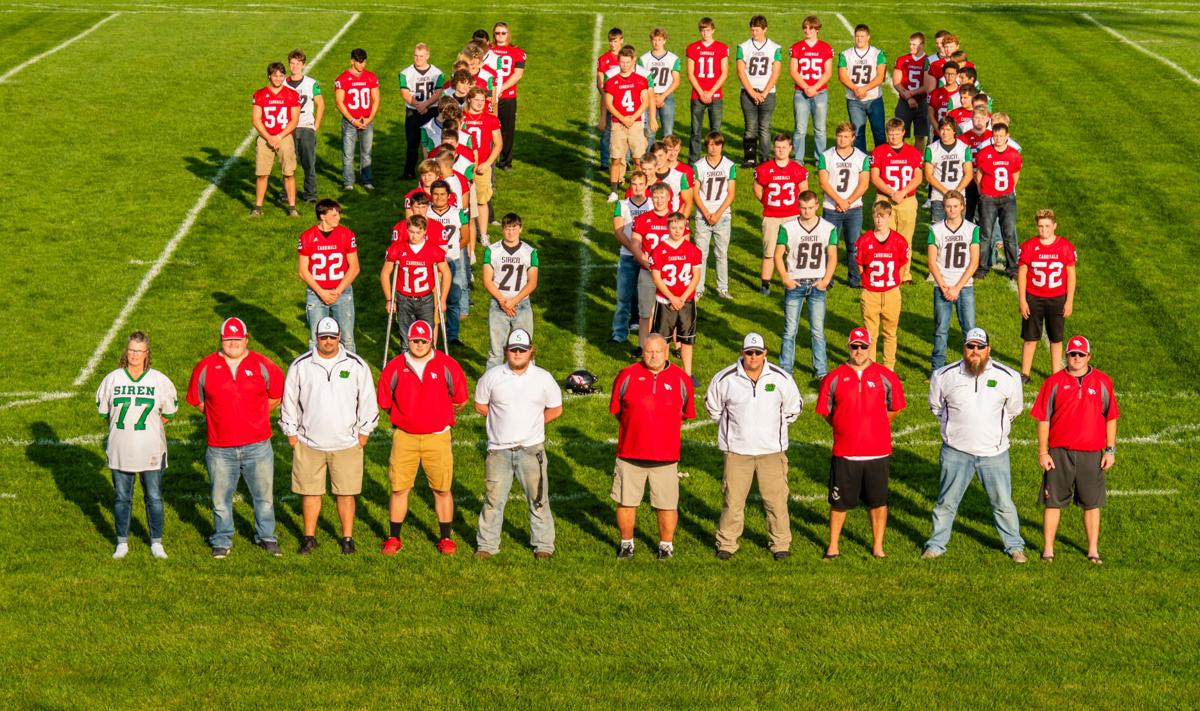 Members from the football teams of the Luck Cardinals and Siren Dragons posed together in the shape of the number 12 to honor MJ Magnuson before their game Friday night.

Members from the football teams of the Luck Cardinals and Siren Dragons posed together in the shape of the number 12 to honor MJ Magnuson before their game Friday night.

For ages engineers have studied various shapes that make a structure strong. Last week the village of Clayton was devastated after the loss of two of it’s community’s young people. During the days of struggle that followed, the village took on the theme “Clayton Strong.” Supporting Clayton was an abundance of backing from area small towns that proved the best shape to keep a structure strong, is a heart.

On September 16 2019, Michael (MJ) Magnuson and Grace Schradle, both 16, lost their lives as the result of a traffic accident. The students were both juniors at Clayton High School.

According to his obituary, Magnuson was a member of the varsity football team (#12), the varsity basketball team (#15), National Honor Society and FBLA. He was been a member of NJHS, FFA, FCCLA, AAU basketball and the e-Sports team. MJ also served as freshmen Class Treasurer, sophomore Vice-President, and was a member of Student Council his ninth and tenth grade years. In addition, he served as a mentor for younger students in Physical Education classes. He had aspirations of becoming an Officer in the U.S. Air Force and getting a degree in engineering.

Schradle’s obituary said her hobbies included many things such as, volleyball (her passion), basketball, softball, riding horseback, cuddling with her cat, shopping, drinking an occasional Caribou coffee, going out to eat, going to the movies, spending time with her best friends. Her loved ones say from the day she entered this world, Grace was beaming with passion, joy, and positivity wherever she went. She was always happy. She carried the most contagious smile and from-your-belly-laugh that will be cherished forever.

In the days that followed the accident, communities near and far showed their support for the small town of Clayton. Clayton School District’s social media was bombarded with messages of support from area schools such as Chetek-Weyerhaeuser, Altoona, Spooner, Fall Creek, Hudson, Grantsburg, Bruce and New Richmond.

The Cumberland Beavers wore purple socks during their football game with Cameron. During the football match-up between Luck and Siren last week, fans wore white and players adorned the number 12 to honor Magnuson.

“In times like this you hope as a coach you can show your players that it is important to show compassion to neighboring communities. Our players got the message, they took it upon themselves to not only be all about taking the number 12 picture before our game, but also had purple headbands and arm sleeves to wear during warm ups to show their support. As a Luck Football program our thoughts and prayers go out to the Clayton School district and the families of the two student athletes,” said Ryan Humpal, Co-Head Football coach for Luck High School.

The school district of Clear Lake released a statement saying, “This week has reminded us about all the things that can be so right about athletics and sportsmanship. Though we wear different uniforms, we all stand together in support of our neighbors in Clayton who are grieving after a tragic loss of life. Last night, volleyball teams and fans from Clear Lake and Turtle Lake wore purple and observed a moment of silence together before the match. Our love and prayers go out to the families and all those in our communities who are hurting.”

The Amery High School volleyball coach Lisa Markee said, “The Amery volleyball team felt it was important to honor the Clayton students at our game last week because we wanted to show our support for all those struggling to process the tragedy both in Clayton as well as on our own team. So many people were affected by the loss, including some of our own players that were former classmates and/or teammates on school and club teams. We had the opportunity to go out and play with our teammates that Tuesday night; teammates who you spend years building memories and experiences with, and it felt important to honor and show support for those whose teams have forever been changed by the tragedy.”

Messages came from places as far as St. Catherine University and Florida State Volleyball, who posted a photo holding the words, “Clayton Strong” with the number nine to honor Schradle.

Ed Cerney, Clayton District Administrator said, “While we continue to mourn the passing of our two students MJ and Grace, here at the school, we are overwhelmed by the number of school districts and community organizations that have sent us condolence messages, offered assistance to work with our students, had photos of support posted with large groups wearing Clayton Purple and Gold, sent flowers or sent snack items used with students and staff, honored our students with activities at games held and those yet to come, and so much more. We are humbled by the Northwest Wisconsin Community support for our grieving families, friends and staff here in Clayton during this tragic time. Thank you, with all our hearts!”

A memorial service was held September 22 at Clayton schools where family, teammates, neighbors and friends shared stories of the joy both Magnuson and Schradle brought to their lives. Tears were shed over the pain of missing them and hugs provided a glimpse of hope and healing.

The things many people enjoy about small towns are the support, kindness and generosity that radiates from fellow residents in times of trouble. Communities both near and far have proven to Clayton their compassion doesn’t stop at the city limit signs. Whether your zip code is 54004 or a combination of five other digits, the shock and impact of last week’s tragedy has left everyone Clayton Strong.