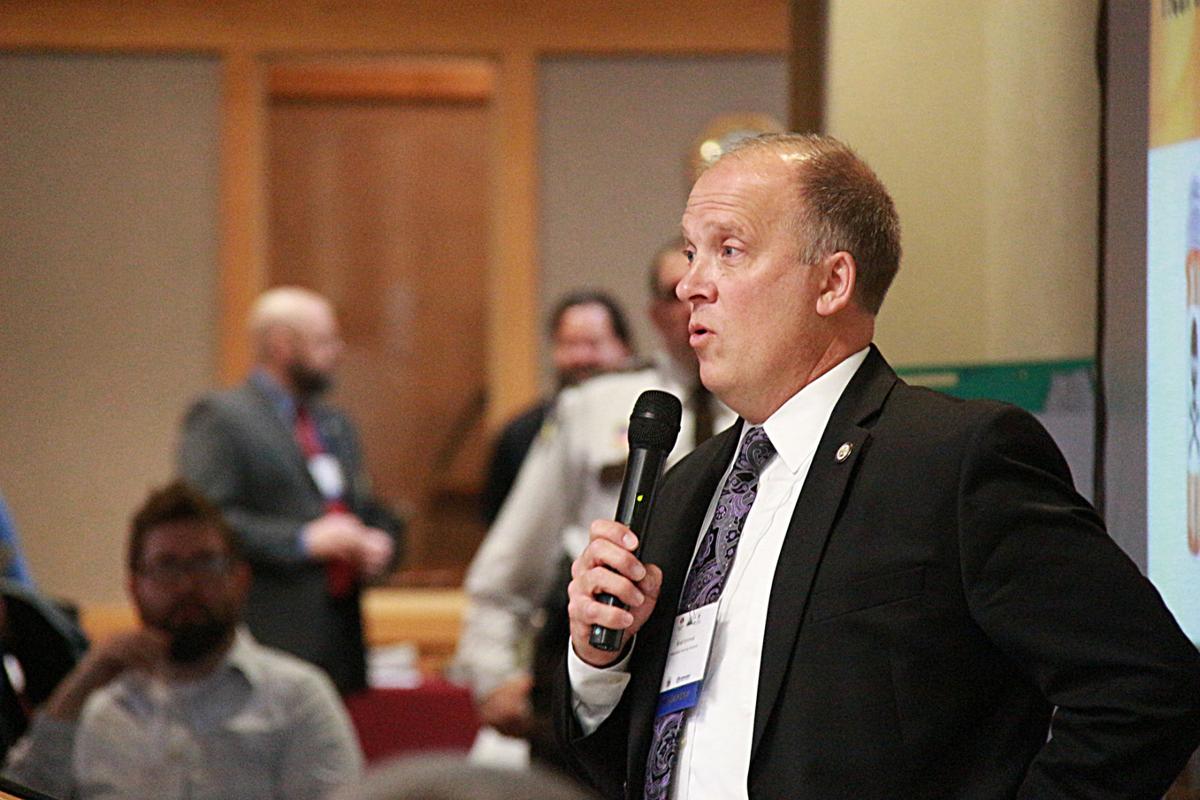 Speaking to nearly 300 local stakeholders in Trego, Attorney General Brad Schimel made it clear that he was aware of what was at stake with methamphetamine. "It’s overwhelming all of your systems, from the jails to the foster homes," he said. 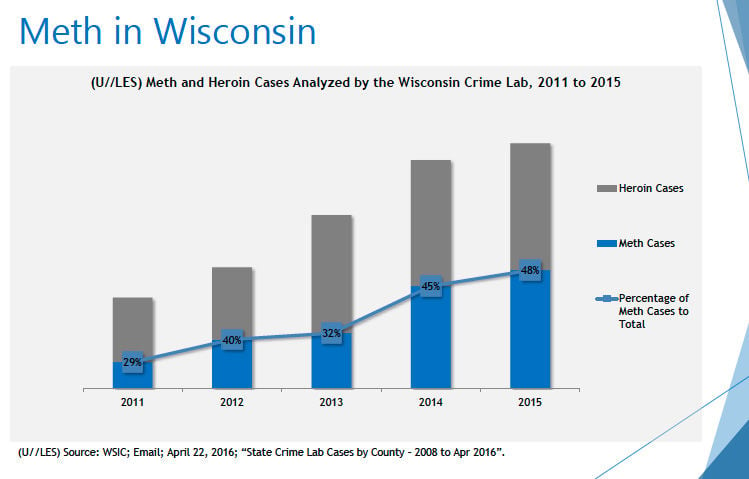 A graph shown during the summit shows the proportion of meth cases to heroin cases up to 2015. Although 2016 stats have yet to be released, on its current trajectory, Attorney General Brad Schimel estimates meth cases will soon overtake heroin cases in Wisconsin. 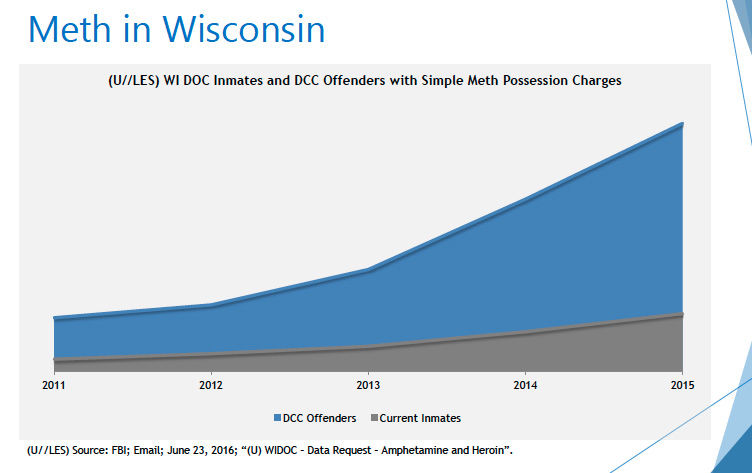 Information from the Wisconsin Department of Corrections shows that the number of inmates statewide being incarcerated for simple meth possession has tripled since 2011. 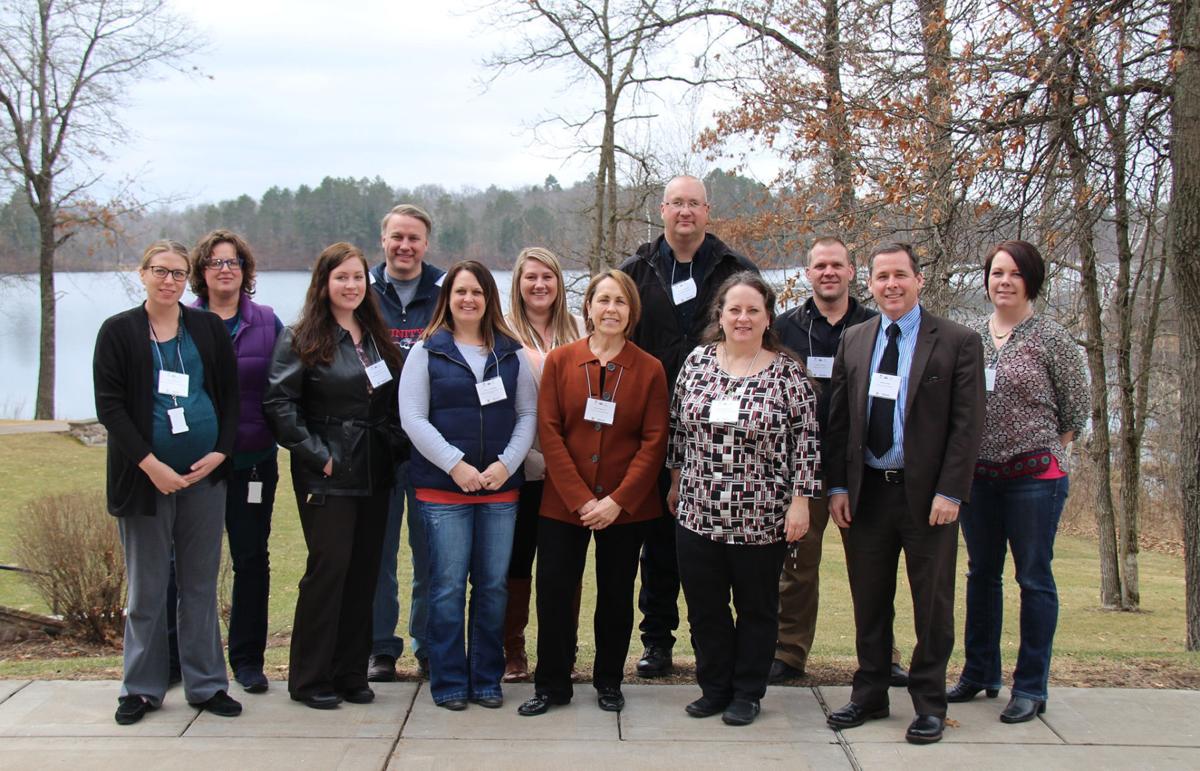 Wisconsin Attorney General Brad Schimel made the long drive to Trego last week. His appearance at the Northwoods Coalition Methamphetamine Summit gave those on the front lines of Wisconsin’s meth crisis reassurance in knowing that a powerful voice is now on their side.

Local officials turned out in force to meet with Schimel and voice concern over the issue. More than 280 stakeholders from thirty-three northern Wisconsin counties were in attendance at Heartwood Conference Center, from law enforcement and legislators, to social and health care workers. The event was hosted by a non-profit division of Marshfield Clinic called ‘Northwoods Coalition,’ a large umbrella organization that has worked toward resolving Wisconsin’s meth-related challenges through grant funding and and the work of smaller, local coalitions. Like the summit held in December in Rice Lake, this one also provided much in the way of education, networking, and idea generation. Schimel opened his speech by declaring that he would henceforth refer to northwest Wisconsin as ‘God’s country.’

“Meth has always been a God’s country problem,” he said. “Statewide we are well aware of the effects of the opiate epidemic. But some of you in God’s country describe meth as even worse. And you’re getting hit with both.”

Unlike heroin’s lethal consequences, meth’s danger lies in the destruction it creates. Now twelve years removed from statewide legislation that helped crack down on local meth labs, meth is back—in a big way.

“Unfortunately it’s a giant game of ‘Whack-A-Mole’ because the Mexican drug cartels simply rolled in and took over production,” said Schimel.

“Ninety five percent of our methamphetamine is imported from Mexico,” he continued. “It’s more potent, it’s more addictive, it’s more destructive, and it’s cheaper. The dealers will even offer you free samples to get you hooked. All of this is a perfect storm, and we had better brace ourselves.”

In highlighting details of a newly released 2016 Wisconsin Methamphetamine Study, Schimel reviewed a long history of the substance, including it’s wide used by the German military during World War II. ‘Tank Chocoloate,’ as it was called, kept tired pilots awake and German soldiers euphoric.

He went on to outline the pitfalls of a new and more difficult kind of drug war.

“We used to find a half dozen crack users and they would all point to the same drug house. The problem now,” as Schimel raises a cell phone, “is that THIS is a drug house. They don’t go to a drug house anymore. By the time we’re calling it, that phone is thrown away.

“With opiates there’s a common and predictable pattern. Eighty percent start by becoming addicted to prescription painkillers. There is no typical way someone finds themself enslaved by meth.

“There is so much money to be made that for every trafficker we take out there’s another waiting to jump in. They’re seeking more and more potent forms because they’re desperately trying to chase the dragon and match that first high. They will fail in that quest. They will never catch the dragon. And they need our help to stop trying.”

While Schimel believes that having adequate police resources is important, he added, “We will not arrest our way out of a drug epidemic.”

“I liken this to a sinking boat. Law enforcement and treatment providers are in that boat, and they are throwing buckets of water out as fast as they can. But there’s a big hole in the bottom. And it’s only going to be patched by prevention. We have got to stop the flow of new people coming in. We need to take on awareness and prevention in a powerful way.”

Northwoods Coalition officials were excited to unveil a newly created logo during the summit, a graphic that will help unite many smaller coalitions toward that common goal of methamphetamine awareness.

Pointing to data from within the state study, Schimel says our problems are far from over.

“We found that meth has surged between 250 and 300 percent between 2011 and 2015, and we see no signs that it’s likely to subside. Human service departments in meth-affected counties have seen dramatic increases in placement due to meth abuse. Those placements are devastating county budgets, and making it harder to fight on the prevention front.

“This is not just a public safety or law enforcement problem. It’s taxing the resources of law enforcement, jails, treatment providers, child protection, public health, health care, educators—everybody. It’s overwhelming all of your systems, from the jails to the foster homes.”

But it’s not all doom and gloom. Schimel says there’s been significant work done in the past four to six months. Many local coalition meetings, including one held in Rice Lake in December, have generated good ideas. Partnerships have been formed with Minnesota and Wisconsin agencies. And a new local drug task force will be dedicated just for meth.

“We ended up getting the largest grant in America thanks to the information we learned from talking with you here in God’s country,” said Schimel.

He hopes that legislators can be talked into spending money on this issue as well, particularly when it comes to making substance-abuse treatment financially feasible for providers.

“We need to pay treatment providers better so they’re attracted to it. Going into the AODA (Alcohol and Other Drug Abuse) world is not paying very well. And we need to change that. We need to look at treating AODA issues just like treating cancer or any other medical issue.”

Schimel is hopeful that it can be done, pointing to events like local summits that have helped tear down silos between organizations, and the recent Heroin Opioid Prevention Education (HOPE) legislation that passed unanimously.

“Meth also gives us an opportunity for that kind of unity. This problem knows no socioeconomic, ethnic, racial or political boundaries. It’s everybody’s problem. Any of our kids could be the next one.”

Northwood’s Coalition members plan to use outcomes from discussion at the summit to help develop a regional plan for action. More information will be released in the coming months.

‘We used to find a half dozen crack users and they would all point to the same drug house. The problem now,’ (as he raises a cell phone), ‘is that THIS is a drug house.’

Need help with addiction? Assistance through Polk County Health is confidential and cannot be discussed with law enforcement. Call 715-485-8402 for local access to substance abuse and mental health services.  For 24-hour assistance, call the AODA crisis line at 888-552-6642.

Methamphetamine (aka “speed,” “crank,” “ice,” “meth”) is a powerful, illegally-produced stimulant that attacks the central nervous system. It comes in various forms and can be eaten, drank, snorted, smoked, or injected. A person will become fixated on and relentlessly pursue an experience equal to their first high, an unachievable phenomenon referred to as “chasing the dragon.” Symptoms of use include nervousness, compulsive behavior, irritability, anger, aggressiveness, hallucinations, paranoia, depression with suicidal tendencies, seizures, heart attacks and strokes. Meth use causes skin ulcerations and infection as a result of the addict picking at imaginary bugs.