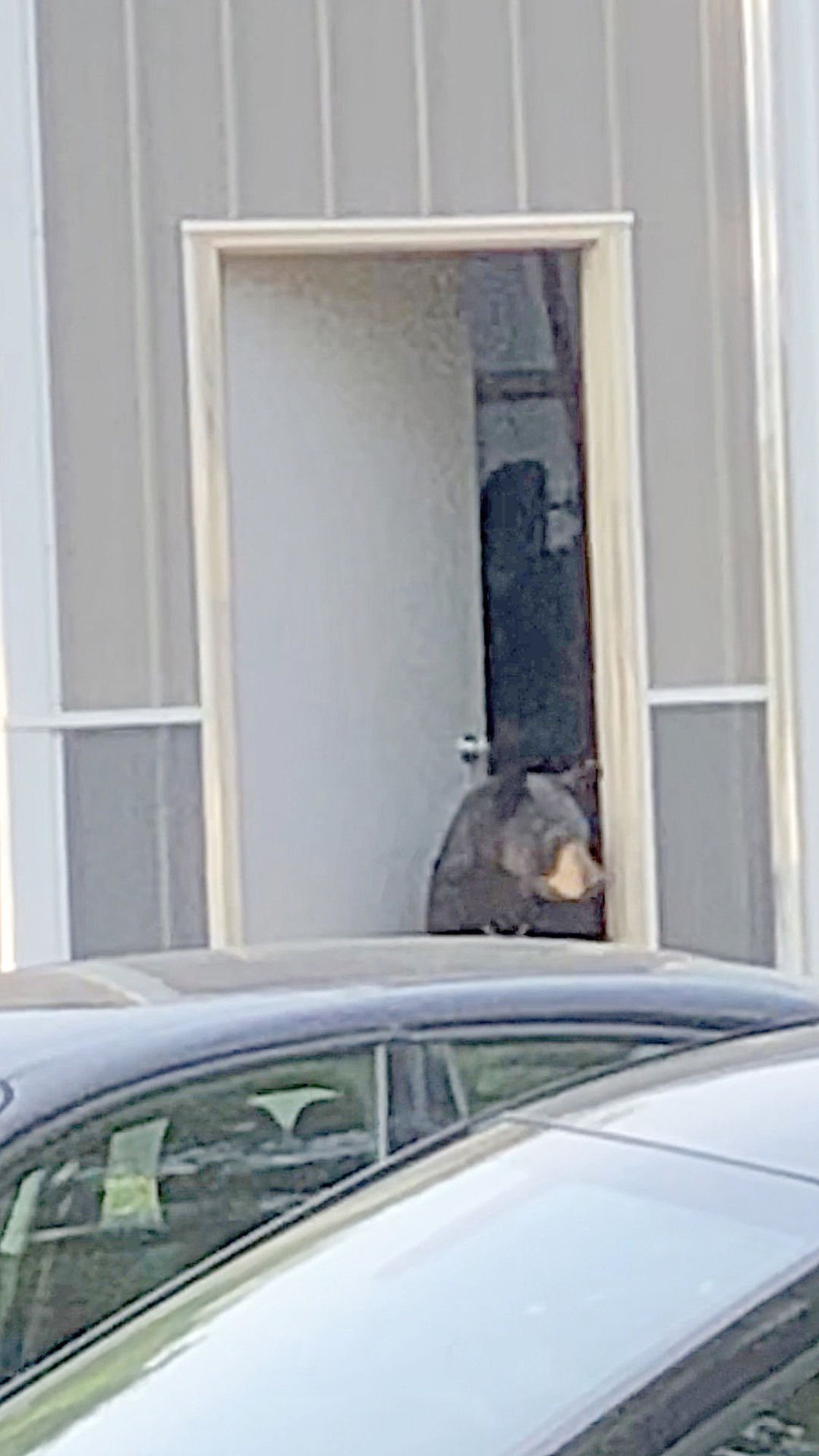 This Black bear has made himself right at home in the garage of Scott and Jennifer Mickelson south of Amery. 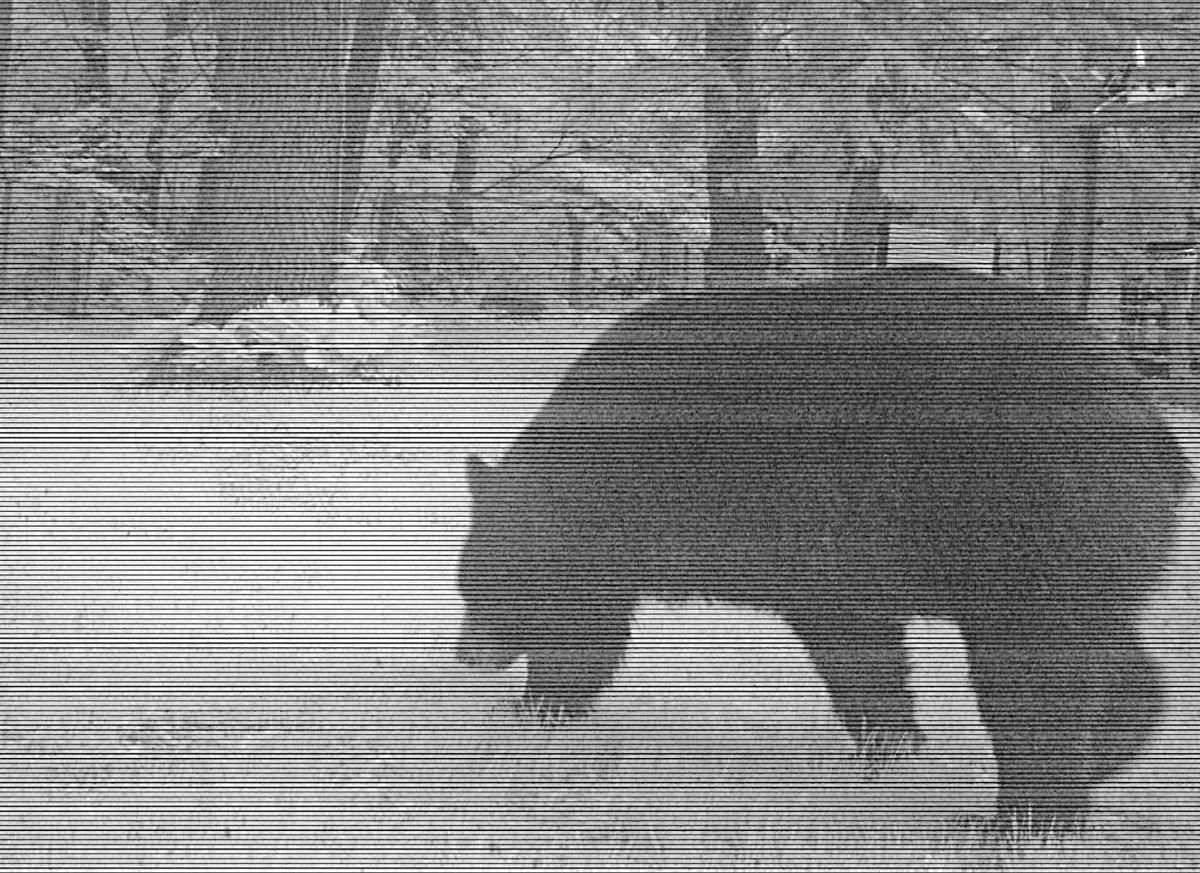 Kevin and Sally Christensen's trail cam picked up the image of this burly Black bear on their property west of Amery. 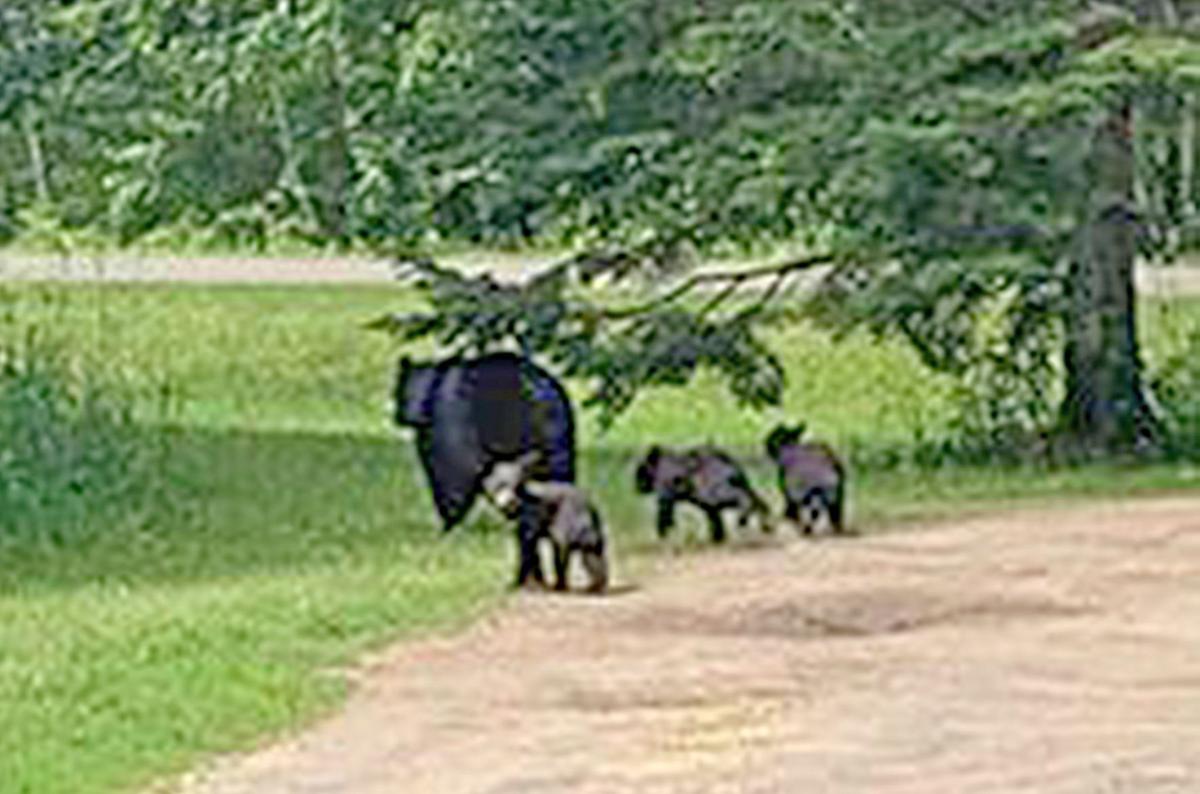 Tis mama and her three cubs stroll across a driveway and into a field north of Amery towards Luck.

This Black bear has made himself right at home in the garage of Scott and Jennifer Mickelson south of Amery.

Kevin and Sally Christensen's trail cam picked up the image of this burly Black bear on their property west of Amery.

Tis mama and her three cubs stroll across a driveway and into a field north of Amery towards Luck.

Social media has recently been bombarded with stories and photos of black bears in area yards. Whether you are frightened by the sight or enjoy watching the furry creatures awkwardly fumble as they make their way through nature’s paths, there are things you should be aware of when it comes to dealing with the thriving black bear population.

Wisconsin’s Black Bear totals are estimated at more than 28,000. The bear’s primary range is located in the far northern third of the state. Due to a growing population, bears are becoming much more common in the lower two-thirds of the state than ever before.

The black bear is the most common and smallest species of bear in North America, and the only wild bear species found in Wisconsin. Adult males range from 250-300 lbs. and adult females range from 120-280 lbs. They are most commonly black, but can also be found in shades of brown or cinnamon.

According to the Wisconsin Department of Natural Resources (DNR), Black bears are normally shy animals. Their home range is about 27 square miles for males, and 8 square miles for females. During the winter, bears don’t truly hibernate. They fall into a deep sleep to conserve energy, but can easily be awakened. Most conflicts with bears can be avoided if best practices are followed.

Lauren Finch is a Natural Resources educator at Crex Meadows State Wildlife Area with the DNR’s Bureau of Wildlife Management. She has offered some guidance to those who are having issues with Black Bears. “If people are spotting bears on their property, and they would rather not have them there, they should first be sure to remove any food sources the bears may be utilizing. For example, take down bird feeders, leave garbage indoors until the morning of pickup, clean barbecue grills, etc.,” said Finch.

She said Black bears are attracted to many commonly used items found around your yard, home or campsite.

Problems occur and risk increases when bears begin to associate people with food. If bears find a consistent food source around people, they will make a habit of visiting the area. These habits are hard to break.

If a bear regularly associates you or your property with food, the well-being of both people and bears is compromised. Feed intended for birds attracts a wide variety of wildlife, including bears.

The safest thing to do is to only feed birds in winter, when bears are in their dens.

If you choose to place bird feeders during warmer months, they should be brought in at night, and made inaccessible to bears.

Hang feeders at least 10 feet off the ground and at least 5 feet from any surface that can support a bear. If bears are observed in the area feeders should be immediately removed.

Garbage cans are also hard for black bears to resist. Cans should be clean and closed tightly and if possible, kept inside a garage or shed. There should be no loose garbage in the area.

Composting in known bear territory may present a risk unless compost is properly covered.

While camping, never store food, cooking utensils or other aromatic products such as toothpaste, deodorant and soaps in your tent. Instead, store in a vehicle or hang out of reach in a tree at least 100 yards from your sleeping area. Campsites should remain clean with all waste, use of bear-proof garbage canisters if available.

Black bear mothers may leave their cubs for up to 15 hours while they search for food elsewhere. If you find bear cubs without their mother, do not handle them. Leave them and call the DNR for further instructions if their mother does not return for them after 15 hours.

If you find an injured black bear or a bear cub that is truly orphaned, contact the DNR at 1-888-936-7463 for help to find a licensed wildlife rehabilitator near you.

Never attempt to rehabilitate a black bear on your own. A black bear, even a cub, can be dangerous to humans as they fight to defend themselves against a perceived threat (humans or pets).

Normally bears try to avoid humans as much as possible. It is important to reinforce this fear by scaring bears away so that conflicts are reduced.

If you see a bear in your yard or around your home place yourself in a secure area so the bear has a clear escape path.

Make a lot of noise by yelling, honking a car horn, or banging pots and pans or consider installing motion-activated water sprinklers, lights or alarms.

Finch said, “If bears start to truly become a nuisance and is trying to get into homes or garages, then USDA- Wildlife Services should be contacted to see if the bear is a candidate for trapping/removal/relocation.”