You are the owner of this article.
Edit Article Add New Article
Home
News
Sports
Opinion
Out & About
Obituaries
Classifieds
E-Edition
Local Guide
Public Notices
Share This
1 of 3 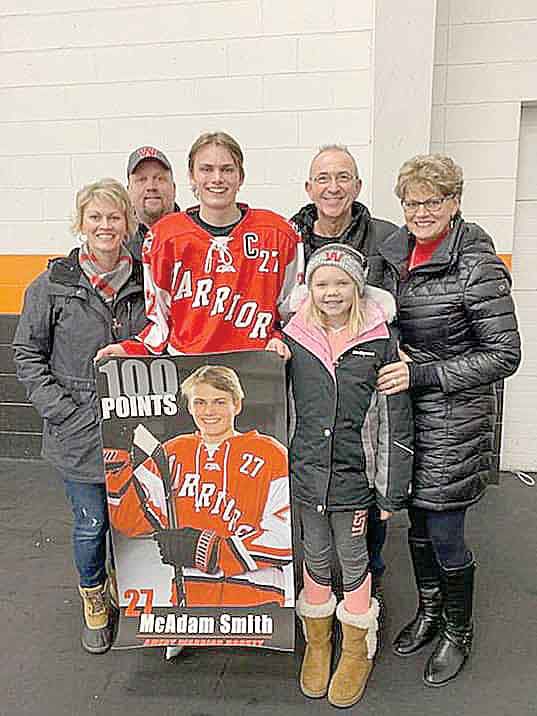 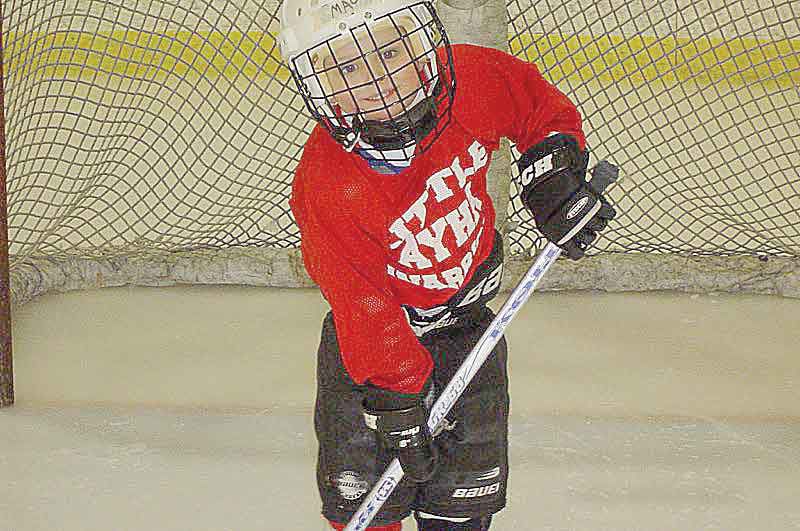 Mac Smith in his early hockey days at the Amery Ice Arena. 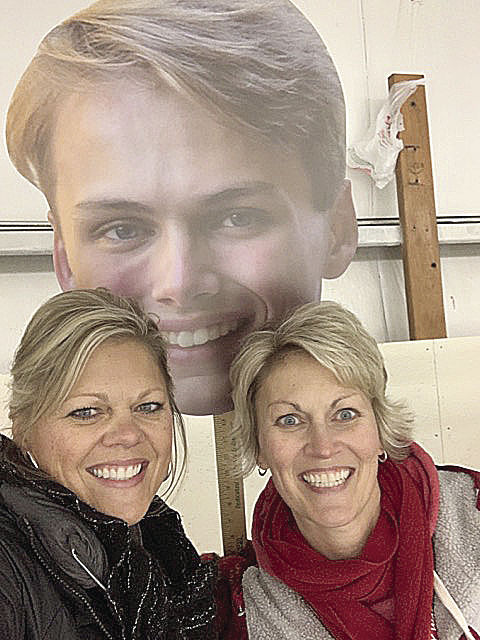 Mac Smith’s aunt, Rachel Hansen (left) and his mom Jessica are shown with a “Fat Head” to cheer for him at the rink .

Mac Smith in his early hockey days at the Amery Ice Arena.

Mac Smith’s aunt, Rachel Hansen (left) and his mom Jessica are shown with a “Fat Head” to cheer for him at the rink .

Hustle and heart has led McAdam (Mac) Smith into the small group of Amery Warrior hockey players who have reached the 100-point mark.  He joins teammates Jackson Henningsgard and Grady Martin, along with what some might now call the O.Gs (a slang term for originals) Ryan Humpal, Matt Mullendore, Tanner Tryggestad, Kyle Schultz and Jake Mullendore.

Mac looks at his induction into 100 Club as a bonus. He said, “I did not set the 100 points as a goal. My goal was to win games and hopefully go to State. As far as the 100 points I thought, ‘If it happened it happened.”

It happened January 25 during an away win over Black River Falls. Smith achieved his accomplishment during the third period, and by the end the Amery Warriors had defeated the Tigers 5-3.

Mac said he started skating around the age of three or four and like his older brother, Camden, played hockey ever since. Their father, Kevin played hockey in Amery as well. He hung up his skates as a Warrior player after graduating in 1987, but continued to be a to be a familiar face in various roles around the rink.

Mac said he grew up watching older kids like Jake Mullendore and Kyle Schultz and hoped to be like them someday. Now he shares a spot in an elite group with the two of them.

He also has thought about the fact that there may be younger kids looking up to him. As far as advice he would give them, Mac said, “Play every game like it is your last.  Also, always play every game with your heart. Enjoy hockey because it is a great sport and the friendships that come from it are life-long.”

He also likes the competitiveness of hockey. “You have to give 100% of yourself 100% of the time,” he said. To get ready for a game he simply eats Jimmy Johns and catches an episode of “The Office.” He said, “I try to relax and not get too nervous before a game.”

Mac appreciates his supportive family who attends his games. “My Aunt Rachel comes to about every game. She has a ‘Fat Head’ that she carries around of my face. I think she even has one of my dad too.”

Looking back, he has quite a few hockey memories from over the years. He enjoyed traveling to various tournaments, staying at hotels and hanging out with his friends while traveling for these games. A memory that is especially dear to Mac took place at the beginning of his high school career. “One that stands out is when I scored my first high school goal during my freshman year. It was our first game. We played against the Minnesota Revolution,” he said.

Like with most situations in life, sometimes you win and sometimes you lose. Mac feels the hardest losses of his high school career thus far, were both against Baldwin-Woodville during playoff games his sophomore and junior years. “Both were close games. My sophomore year, we even had an early lead, but ended up losing,” said Mac. The day after his Free Press interview Mac and his team went on to beat Baldwin-Woodville and become MBC champions. The last time Amery held that title was 2012.

When he isn’t on the ice, Mac likes playing baseball, hunting, going to the family cabin and snowmobiling. He said, “I like the outdoors in general. It is fun to be outside and be active.”

He enjoys his time at Amery High School. “I think the teachers are good at relating subjects to everyday life. They are really personal with their teaching,” Mac said.

Mac will be attending UMD after high school, majoring in Engineering.

He has a positive outlook for the remainder of his high school hockey career. He said, “Hopefully we get a high seed in playoffs, win sectionals and go to State. Mac said he knew Hayward and Superior would be tough teams to beat, but was confident it could be done.