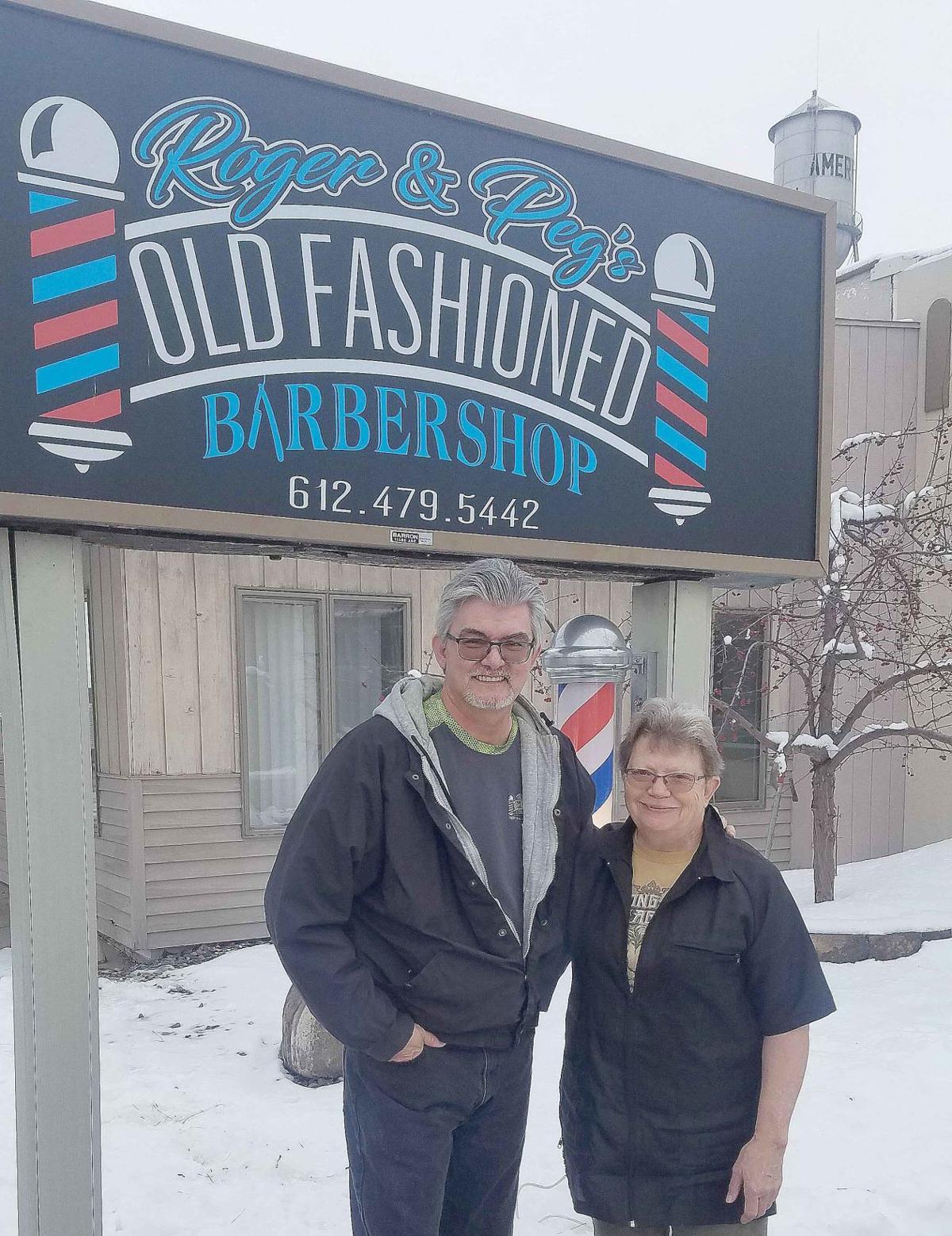 Roger and Peg Valasco are shown outside of their busy Keller Avenue Barbershop. 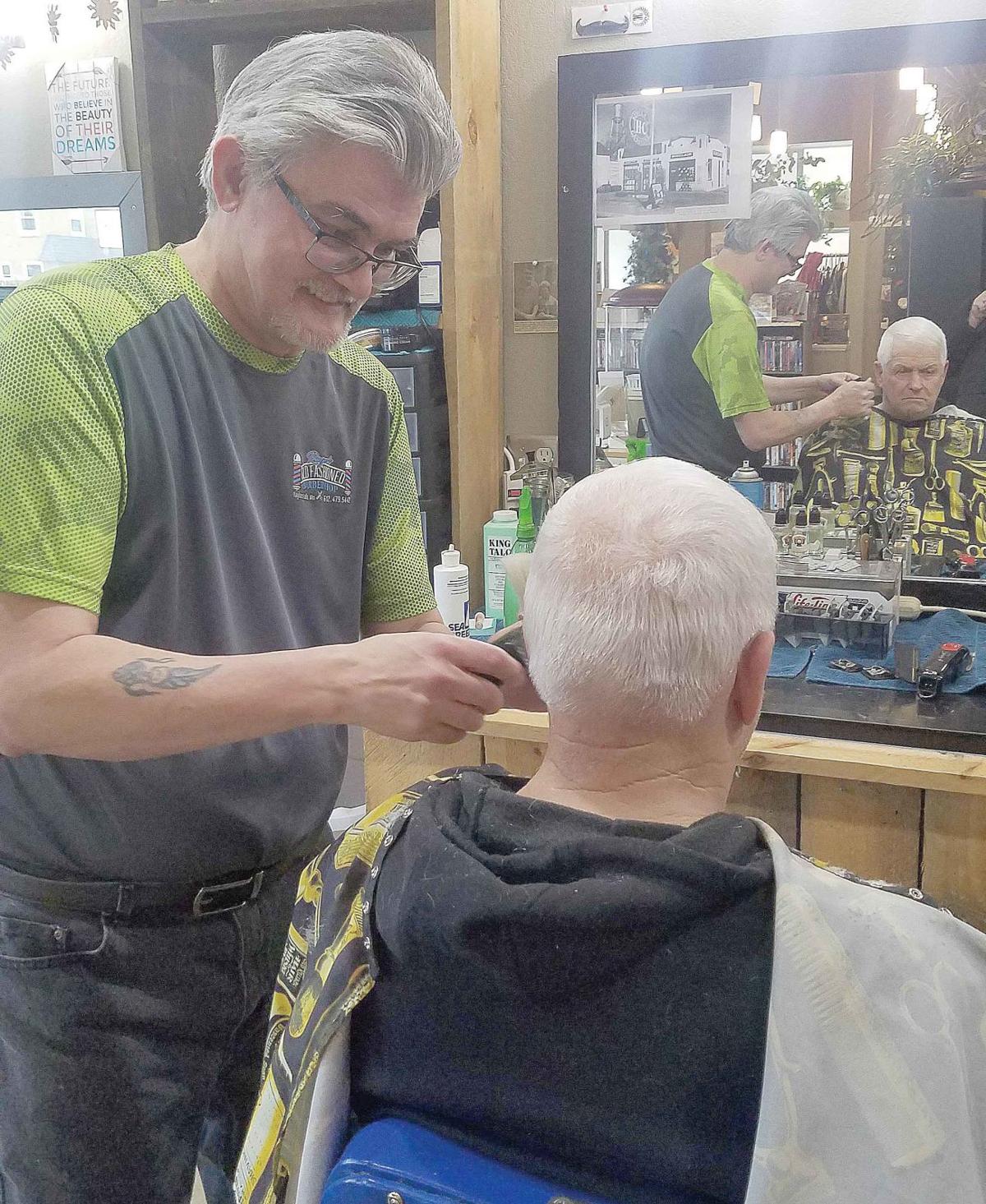 Roger Valasco is performing over 20 haircuts a day at his new shop located in downtown Amery.

Roger and Peg Valasco are shown outside of their busy Keller Avenue Barbershop.

Roger Valasco is performing over 20 haircuts a day at his new shop located in downtown Amery.

Adventures are funny things. Some are simply happy accidents-a single spark that ignites an unexpected chain of events. Some adventures though, may seek you out, whether you want them or not, and take you somewhere you never imagined you would be. Roger Valasco has experienced a little of both types of adventures and it has landed him and his wife Peg, as the owners of Amery’s newest barbershop.

Roger and Peg’s Old Fashioned Barbershop opened September 16, 2019. It has been so busy; they have barely had time to look back. But when they do, it is a pretty interesting story.

Roger started cutting hair in 1980 in a shop located in Biloxi, Mississippi. He enjoyed what he did and went on to purchase the business in 1984. For years things were rolling right along.

In 2005, Roger mortgaged his barbershop to purchase a house. “Three months later, Hurricane Katrina hit,” said Roger. The morning of August 29, 2005, a two-day path of destruction left horrific conditions in Biloxi. They suffered from storm surge waves as high as 20-30 feet and the hurricane-force winds of Katrina were a Category Four. Damage was spread and scattered because of tornadoes that moved in ahead of the hurricane. Roger said, “Katrina took away my house, my shop and my town.” He said the only thing left standing in Biloxi was the Hard Rock Café guitar.

Half a million people from Mississippi who were affected by Katrina, applied for assistance from the Federal Emergency Management Agency (FEMA). Roger decided to go to work with FEMA in disaster relief and headed to Springfield Kansas for training.

During 2008, while working during a hurricane search and rescue, Roger and his entire crew were struck by lightning. He was the sole survivor. “I woke up in the hospital and began a bunch of scans. It was during those scans they found I had Cancer. As horrible as the lightning strike experience was, it saved my life. I would have never known about the Cancer,” he said.

He was given the choice of two different locations to proceed with his treatment, Arizona or Minnesota. He chose the latter. He said, “It took six years, but we beat the Cancer. Now I deal with uncontrollable Diabetes, but I will beat that too.”

He eventually decided it was time to get back to cutting hair. “Because of the experience I had, I only had to pass the boards to get my license for the state of Minnesota and it was the same in Wisconsin,” said Roger.

It was one of those happy little accidents that led Peg to be the co-pilot on Roger’s adventure. He was working at a hair cutting chain in St. Croix Falls and had been called in on his day off to cover for a co-worker out with appendicitis. Peg went in for a haircut and was placed in his chair. “Our conversation during that haircut was terrific. We talked about everything and had so many common likes. So I asked him if he would like to meet for coffee sometime and maybe become friends and here we are,” Peg said. “We treat each other and our families with love and respect because that is what our marriage is built on. We are the best of friends. God answered every prayer of everything I ever wanted in a human being,” she said. “I love her enough that I even want to work with her everyday,” he replied.

Because of the ordeal he experienced in Biloxi, Roger never thought he would want to open his own business again. Peg helped him change his mind; he opened his own barbershop in Taylors Falls and was quite busy. The couple decided Peg should become licensed as well. It was going to be spendy to make that happen in Minnesota, but in Wisconsin Peg could work as Roger’s apprentice. “This is the only place I can boss my wife around,” Roger said with a giggle.

They couple looked in several Wisconsin small towns before deciding Amery seemed like a perfect fit. “Oh my gosh, we have been so busy here since day one. I am blown away. At least 20 haircuts a day,” Roger said. Peg added, “A lot of our clients from Taylors Falls have followed us here.”

They drive each day from Luck to Amery to assist men, woman and children with their hair cut needs. Roger always offers jokes as a bonus to the services and Peg runs a little store and Ebay business out of the shop as well. They are looking forward to an even busier summer when the snowbirds return and lake homeowners are back in town.

Their shop features an eclectic array of decorations to catch the eyes of visitors. Roger said not only is the business known as Roger and Peg’s Old Fashioned Barbershop, but also as “The Man Cave.” Not wanting to leave out his partner in crime, Roger grinned over at Peg and added, “I might even have to build her a She Shed.”