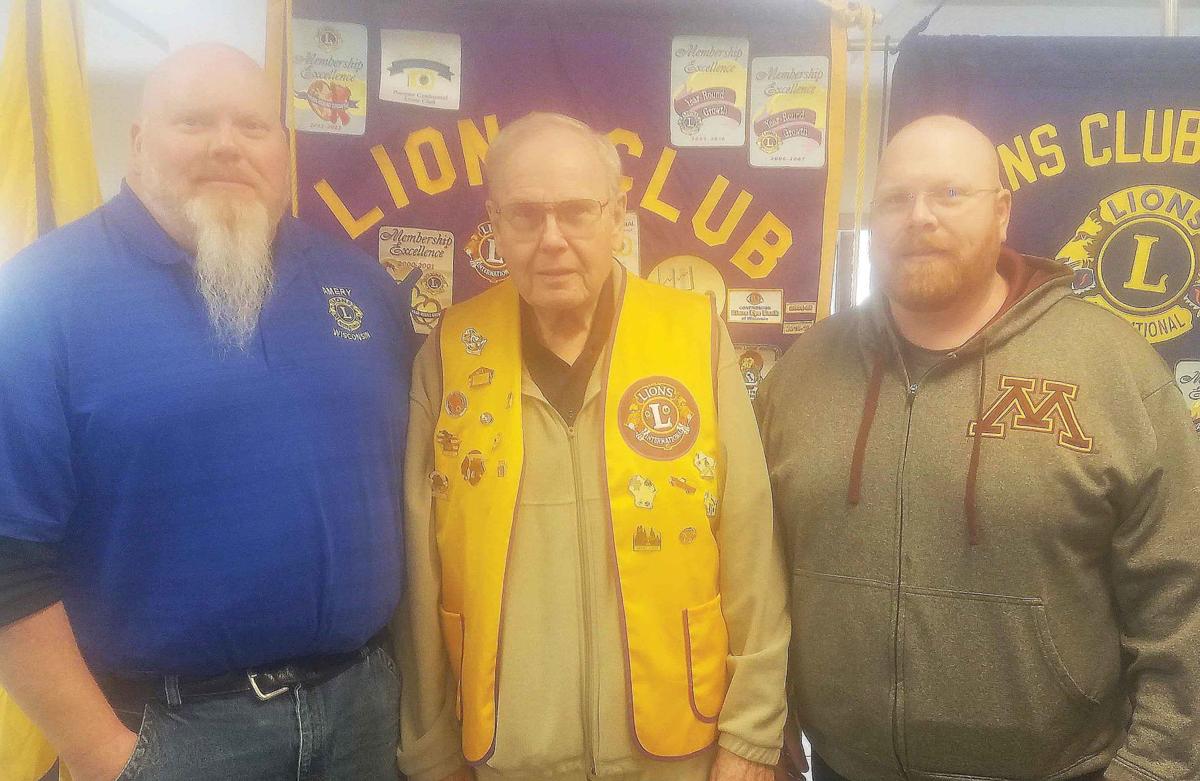 L-R: David, Norm and Steve Osero are shown before the presentation of the Melvin Jones Award to their family.

L-R: David, Norm and Steve Osero are shown before the presentation of the Melvin Jones Award to their family.

The Amery Lions honored a family, who has built a foundation largely made of generosity and community contribution. Led by their patriarch, Norm, the Osero family gathered for the presentation of the Melvin Jones Award, a high honor, on January 13.

Dave Nelson, President of the Amery Lions said, “The Osero family has been extremely involved in our Lions Club. Several members of the family have been presented individual Melvin Jones Awards.” He explained that Norm suggested the $1000.00 that is usually given out to recipients of the award, might be a nice donation to the Camp Wapogasset Bible Camp. Nelson replied, “As long as it is in the Osero family’s honor, we will do that.” He said the check presentation done that day to the camp would be for $1,500.00. A portion of that money, $1000.00 is to go towards their Gather campaign and the other $500.00 can be used as they see fit.

Norm Osero said it was a real honor and they are very humbled to receive the honor. “I really want to thank my wife who supported me in a lot of endeavors. Thank you to Marilyn,” he said.

Steve Osero shared some of the history he has with Wapo, saying he has wonderful memories of his parents taking he and his brothers camping there. He said he also has fond recollections of spending time with his wife at Ox Lake during there young dating years. “We have a lot of history with Wapo being involved in dinner theater, we love everything about it. It is an honor from the Lions Club, thank you very much for acknowledging what we have done in the community and then helping us give back more to Wapo,” Steve said.

Steve gave a history of the various businesses that have been owned by their family over the years.  “Feed more families has always been my dad’s motto. In fact to quote him exactly, ‘I could have grown this business to put a million dollars in my own pocket, or I could have grown this business to feed families.’ He always chose to feed families,” said Steve.

He then told a story about a time when business was down at one of their endeavors, Dynotronix. “My dad asked a few people to take pay cuts. He was the first one to take a pay cut. When those people stuck by him through all of it, when business turned around, he paid them back everything they would have earned during that time,” he said. Steve said he was in his early twenties when that happened and he wondered why his father did such a thing. “My dad took me out on the production floor and pointed at all the equipment and said, ‘Look around. All of this is just a giant paperweight if I do not have people to take care of it. If you take care of people they will take care of you.’ That was one of the biggest lessons I learned from my father,” said Steve. He expressed he hopes to be even half the person his dad has been.

Dave Osero added to his brother’s sentiments saying, “The second piece to the puzzle is Norm always said, ‘Care care of employees and remain involved in the community.’ That is why we are here.”

Camp Wapo representatives attended the ceremony and were quite thankful for graciousness of the Osero family and the Lions Club. Heather Eggert, Executive Director said, “This is a really special day to be with you. We are happy to be here in support of the Osero family. We all know how incredibly generous and kind they are and we know the Lions Club is involved in all kinds of good and they are part of the reason this community is strong and growing. We are so glad that you rise to the challenge.”

She said in particular she feels the Osero family has shared their gifts of time and talent as well as financially shown support to Camp Wapo and Ox Lake. She said she is grateful for the variety of ways they assist with Wapo’s dinner theater.

Eggert shared the history of Lake Wapogasset Lutheran Bible Camp. “We are celebrating 72 years of ministry, which is pretty incredible,” she said. She described how 16 local pastors came together in 1947 when they heard a peninsula resort on Wapogasset was going to be sold. They thought it would be a great place for a bible camp. “Each of those 16 pastors had $1000.00 to give so they purchased that site $16,000 and opened it up for its first summer of campers in 1948. When I think about the vision and foresight these men and women put into play and wonder what their reaction would be now when they realized the hundreds of thousands of people that have come to our sites in the past 70 plus years,” Eggert said.

In 1980 the land now known as Ox Lake was purchased. She said Loren Teig, who was the Executive Director for 38 years, had a vision to create opportunities for kids to come to camp and experience what life would be like to live as a Christian in another part of the world. He built villages and hired people from around the globe to help lead kids through cross-cultural programs. “The world changed a little bit and it became harder to get the right kinds of staff from International sources so we have been in a period of adjustment,” she said. Thus, there have been changes in structures, roads, water and electric at Ox Lake.

In 2002 Wilderness Canoe Base near the Gun Flint Trail in Grand Marais Minnesota was added to the Lake Wapogasset Bible Camp family.

Camp Wapo offers boat-in worship in the summer, a Memorial Day pancake breakfast, golf tournament and retreats. Eggert said, “We are blessed all of the time by this community and the way that you participate and show up to support our fun days.” They welcome community groups and school groups to use the property as well.

Currently the camp is in the midst of a capital campaign called “Gather.” The purpose of the three million dollar campaign is to construct a new dining hall and hospitality center. “Every year we welcome over 5,500 youth into our summer camp programs and throughout the year an additional 10,000 retreat guests. We typically feed 450-500 people at each meal all summer long in a space that is designed to host 225 people,” she said. She said they have raised about two million dollars so far. Eggert said, “The Osero family have done an incredible job of giving support to this new building in a way that has been inspiring and spurs on other people to give to this project.”