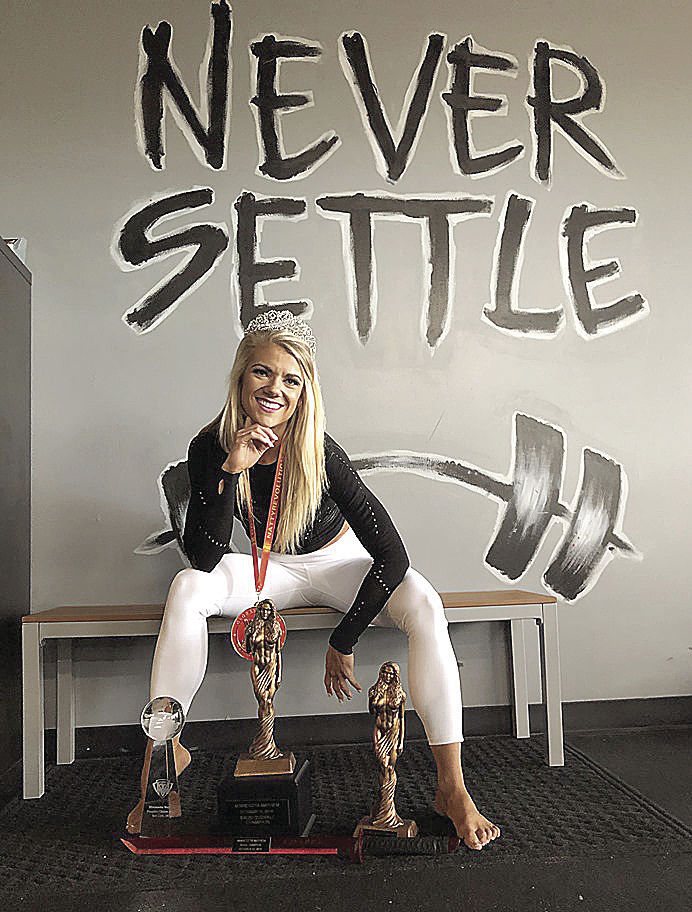 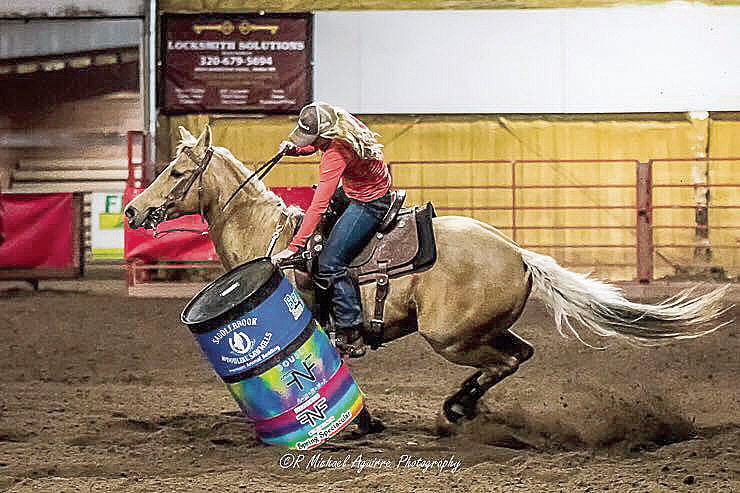 Throughout her training for bodybuilding, Terra Mitzel said she started performing better in her barrel patterns.

Throughout her training for bodybuilding, Terra Mitzel said she started performing better in her barrel patterns.

Less than 2 years ago, 2012 Amery High graduate Terra Mitzel found herself with a dilemma. She stepped on the scale and discovered that she was 25 pounds heavier than she'd ever been before and didn't like it.

A former starting guard on one of the most successful girls' basketball teams in Amery history, and still a competitive barrel racer, Mitzel made the decision to start living a healthier lifestyle that included more time at the gym and smarter eating habits. On Oct. 13, she earned her Pro Natural Bodybuilding Association Pro Card after winning the overall title at the Minnesota Mayhem Natural Bodybuilding Championships in Duluth, Minn. - her very first bodybuilding competition.

Through a lot of self discipline, Terra dropped 29 pounds in the first year.

"It wasn't a diet," she said. "I wanted to feel good in my body and fit for my horses - be a better rider. I just didn't feel good at the heaviest I've ever been."

Through her efforts, she found herself feeling more confident and performing better in her barrel patterns.

"I have never saved so many barrels than this summer," she said referring to her ability to manually stop a barrel from tipping over by leaning off the side of the horse and grabbing the barrel.

Competing at least twice per month all over Iowa, Minnesota, Wisconsin and the Dakotas against many of the top barrel racers in the Midwest, Terra collected four saves this summer. One of them even led to to her pulling an $800 check rather than going home with a "no time."

"I credit the training," she said.

About four months ago, she decided to take her training up another notch.

She said to herself, "I'm this far. I want to do a (bodybuilding) competition."

Only this, time she was on a mission to prove to herself that she could do anything she set her mind to.

So just 14 weeks before the Minnesota Mayhem Natural Bodybuilding Championships, she hired a personal trainer, Chris Spaffort of Midwest Health and Fitness in Hudson, to guide her through the process of prepping for the bikini competition.

"He tweaked my diet and pushed me - weighing out my food," Terra said of her trainer.

Perhaps more difficult than following such a strict diet was the collateral damage that went with it, Terra said.

"I was missing out on events to avoid temptation - dinners, tailgating," she said. "I couldn't have a drink, burger or bite of something. I had to remove myself. After a while, I missed my friends; I missed my family. Mentally was hard."

In addition to the nutrition coaching, Terra also had several other obstacles to overcome, including building up her glutes and hamstrings, learning the poses and getting comfortable in wearing practically nothing.

"For bikini, it's important to have good legs," she said. "My back, shoulders and arms were pretty good. I just needed to get more defined."

As for the apparel... That was a completely different level of discomfort for someone who didn't even play volleyball in high school because Spandex was too little clothing for her. And five inch high heels...? Forget about it.

"I wear cowboy boots," she said.

In fact, when she got the competition swimsuit bottoms in the mail, she started crying.

"I can't wear this in public," she told herself.

Then she realized, "If you're not uncomfortable, you're not growing," and reprogrammed her brain much like she'd been reprogramming her body.

"I worked hard for this, and going to wear it with pride," she said.

As the summer went on, Terra checked in with her trainer once per week for diet and exercise advice while doing cardio four to five days per week, taking night classes, working two horses, competing in barrel races on the weekends and working her full time job as a buyer for a medical supply company.

"I've never been busier," Terra said, but recognized that working so hard on so many goals was generating a snowball effect that included setting personal records on her horse, Paris, while the two of them put together their best year of winnings

In September, she cut back on the number of barrel races to dial in on her prep for the bikini competition.

"I got really tired and found it hard to do daily tasks," Terra said about her final days before the competition.

By competition day, she had lost an additional 15 pounds to be stage ready.

As a first timer on the stage, Terra competed as a beginner in the medium height division and won her class. From there, she moved to the open class as a non-pro in her height division and won again, earning her pro card. That win advanced her to the overall competition where she went against the open class winners of the short and tall divisions, and won once again.

Mike Neumann (2012 Mr. Illinois) of Inside Natural Bodybuilding identified Terra as the woman to beat from the very beginning, saying what set her apart was her legs, specifically her outer thighs, which he described as her "wheels." That difference led him to believe that Terra would be able to place in the top half of most pro competitions already.

"It was very emotional," Terra said after the overall win. "This was the most challenging, rewarding and self fulfilling thing I've ever done...  If you have a goal, you've got to work for it. Nothing comes easy."

Despite the emotional rush and satisfaction of reaching her goals, Terra warns, "How I was on stage is not realistic. I would die. It's not goal I want anyone to think is a realistic goal that a girl should have. I didn't have any water in me. I physically could not keep that body. That's not what pretty is."

After living on 3.5 ounces of protein each of the last three days before the competition, she said her body had gone into starvation mode.

In fact, now she is the process of "reverse dieting," essentially reteaching her body how to process foods again.

"I have to slowly introduce things in," she said. "My body can't handle deserts."

Fortunately, Terra is taking a realistic approach to the sublime journey and is refocusing her energy on returning to a healthy lifestyle with the continued support of her friends, family and coworkers.