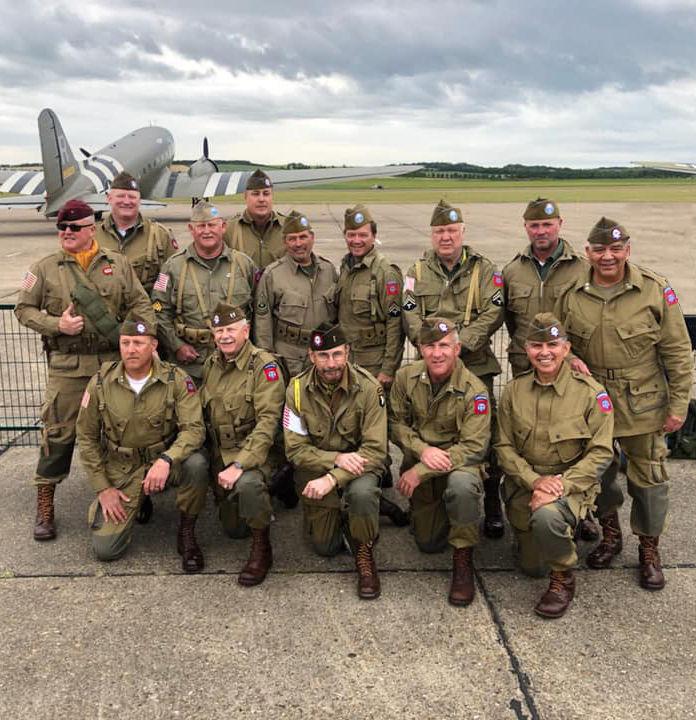 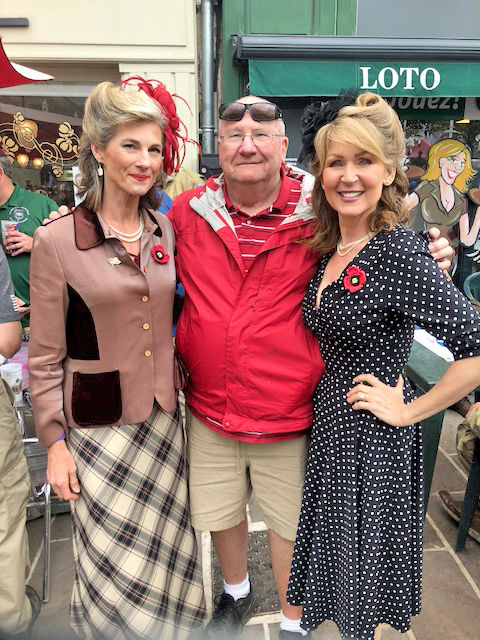 Retired Amery teacher Tom Butcher accompanied his  son Matt to the Normandy 75th Anniversary celebrations and reenactment. Here he is shown with ladies dressed as if it truly was 1944. 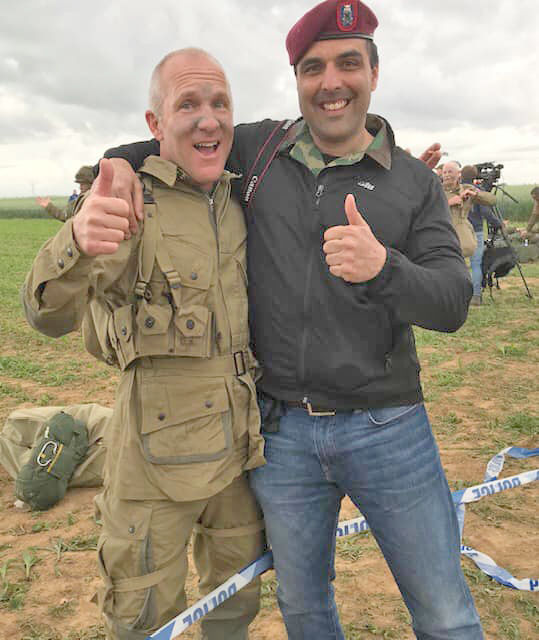 Matt Butcher is shown with Alexander Gill who traveled to France from Montreal Canada to collect his Veterans Parachute Battalion coin. 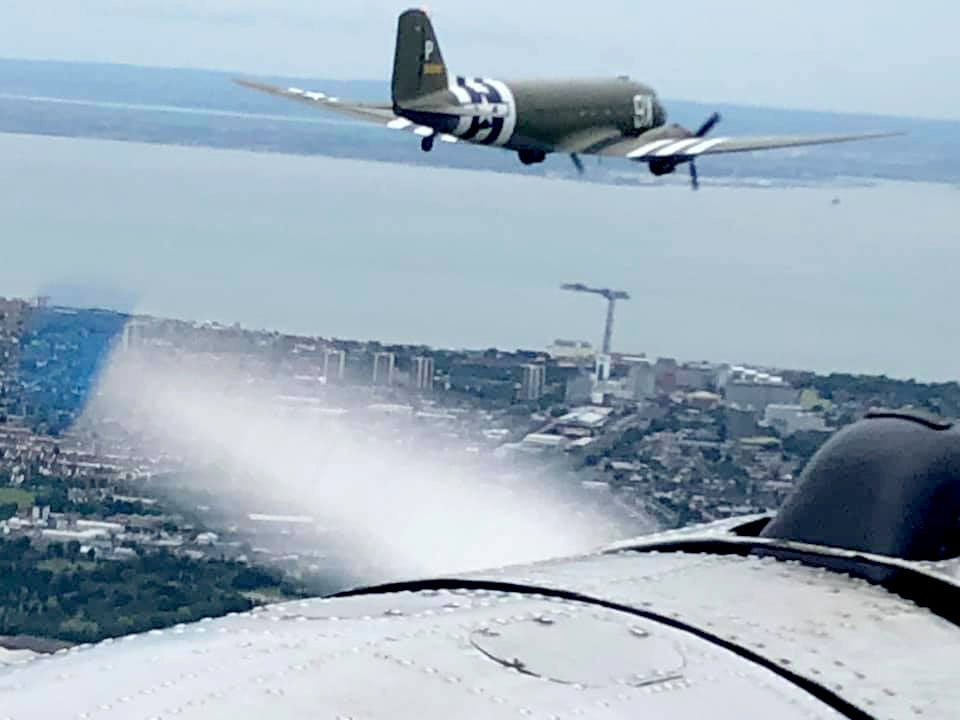 As Matt Butcher flew across the English Channel on a C47 Dakota, he could see other C47s, much like D-Day. 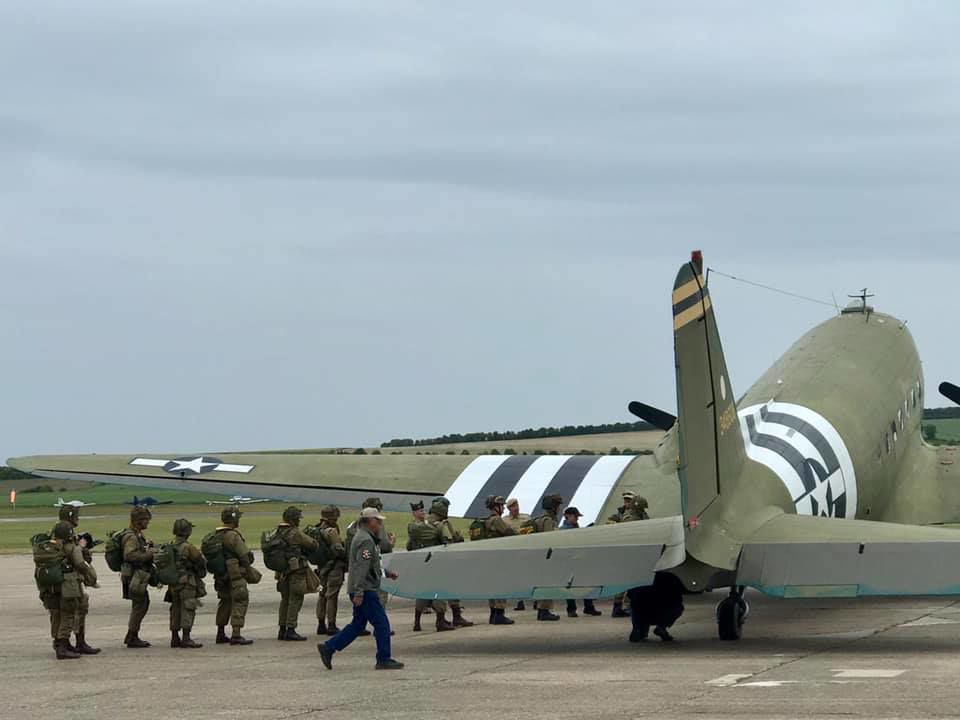 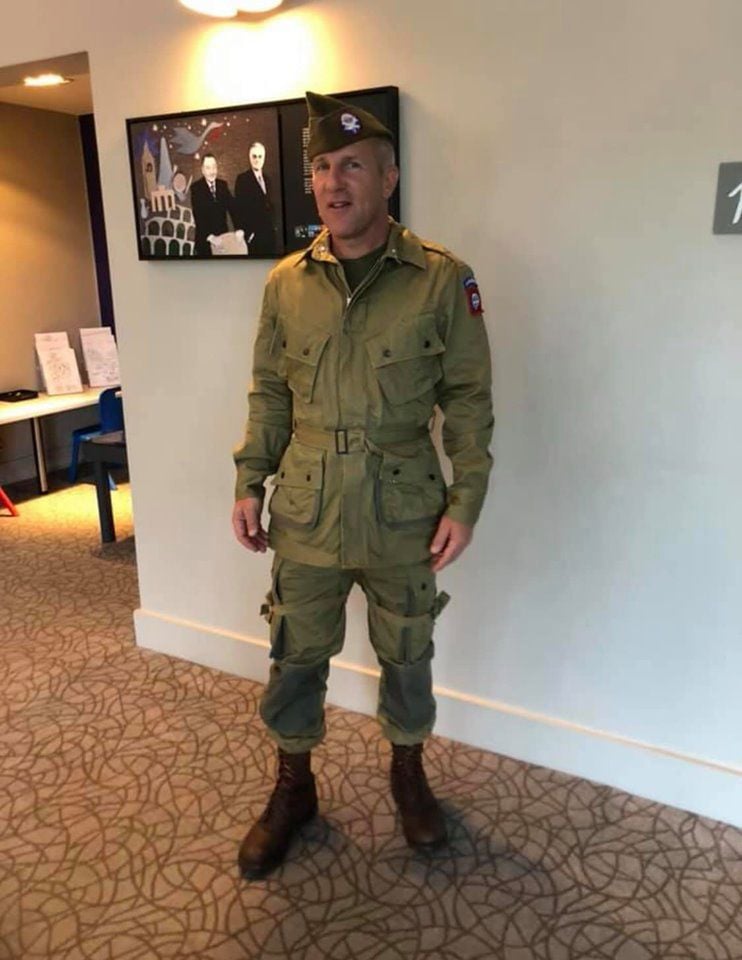 Retired Amery teacher Tom Butcher accompanied his  son Matt to the Normandy 75th Anniversary celebrations and reenactment. Here he is shown with ladies dressed as if it truly was 1944.

Matt Butcher is shown with Alexander Gill who traveled to France from Montreal Canada to collect his Veterans Parachute Battalion coin.

As Matt Butcher flew across the English Channel on a C47 Dakota, he could see other C47s, much like D-Day.

People all around the world watched June 6 as paratroopers marked the 75th Anniversary of the D-Day invasion with a re-enactment of the Normandy landings, which have been called the beginning of the end of WWII in Europe.

Drifting down to the ground by parachute were feet that once pounded the pavement of Amery.

Matt Butcher, a 1985 graduate of Amery High School, took his chance to honor the paratroopers who participated in the parachute assault into occupied France in 1944.

Codenamed Operation Overlord, the battle also known as D-Day saw approximately 156,000 American, British and Canadian forces landing on five beaches along a 50-mile stretch of the heavily fortified coast of France’s Normandy region. The invasion was one of the largest amphibious military assaults in history and required extensive planning.

Before D-Day, the Allies conducted a large-scale deception campaign designed to mislead the Germans about the intended invasion target. This started a chain of events, by late August 1944, all of northern France had been liberated, and by the following spring the Allies had defeated the Germans.

In January 1944, General Dwight Eisenhower was appointed commander of Operation Overlord. In the months and weeks before D-Day, the Allies carried out a massive deception operation intended to make the Germans think the main invasion target was Pas-de-Calais, rather than Normandy.

Many tactics were used to carry out the deception, including fake equipment; a phantom army commanded by George Patton and fraudulent radio transmissions.

By dawn June 6, thousands of paratroopers and glider troops were already on the ground behind enemy lines, securing bridges and exit roads. The invasions began at 6:30 a.m. The British and Canadians overcame light opposition to capture beaches. U.S. forces faced heavy resistance at Omaha Beach, where there were over 2,000 American casualties. However, by day’s end, approximately 156,000 Allied troops had successfully stormed Normandy’s beaches. According to some estimates, more than 4,000 Allied troops lost their lives in the D-Day invasion, with thousands more wounded or missing.

After high school, Butcher joined the Army and was assigned to the 82nd Airborne Division where he was a machine-gunner, sniper and squad leader. After three years, he attended UW-Parkside in Kenosha for three years, until running out of GI Bill money. Butcher went back into the Army with the 3rd Special Forces Group for seven years. Next, he joined the U.S. Border Patrol in Casa Grande, AZ where he just retired in August after 20 years.

“In January 2017, I saw information online about the 75th anniversary of D-Day. I contacted a friend of mine, Pete Sotos, who had also been a paratrooper in the 1980s as I had. I said we should join a re-enactment group and go jump into Normandy for the 75th anniversary of D-Day. He said, ‘we will start our own group to honor the great paratroopers of D-Day,’ That is how VeteransParachuteBattalion.org was started,” said Butcher.

Over the next year the group grew to 15 members. They formed it as a 501(c)(3) nonprofit organization. Through our website and social media they began spreading the news and getting donations to the organization to complete the mission. They sold special coins and U.S. Flags that accompanied them during the jump into Normandy to help cover the high expenses of the endeavor.

Butcher said, “During the same time, another organization, Daks Over Normandy, was doing great work in getting together resurrected original Dakota C 47 aircrafts that had participated in D day.  One of them was ‘That’s All Brother’ which was found in a Wisconsin boneyard.”

May 30, 2019, Butcher arrived in France with his father, Thomas, a retired Amery teacher, to begin the honoring of all of those who fought on D-Day. “We spent 1st and 2nd of June enjoying all of the celebrations and displays, museums that we could fit into two days,” said Butcher.

June 3 Butcher traveled to Duxsford airfield near Cambridge UK. 11 of the original and restored aircraft from the day were waiting there. The next day he traveled back to the airfield to board his assigned planes with the other veteran parachute battalion members to fly across the English Channel.

They parachuted into a drop zone at Sannerville, Normandy France with 220 paratroopers. It was the biggest event for the 75th anniversary of D-Day.

“The support at Duxford Airfield, in France, was overwhelming. Tens of thousands of people showed up at the airfield while we were there. They lined up and cheered us as we boarded the planes. We flew across the English Channel accompanied by restored World War II fighter planes. Outside the window of my C 47 Dakota was a British Spitfire,” said Butcher

Along with those cheering at the airfield, were many sending their support to Butcher via social media. He updated his Facebook page throughout the experience receiving well wishes from supporters all over the world, including Amery.

Butcher said, “It was approximately 1.5 hours flight to the drop zone in Sannerville, France. The formation of C 47s made two passes over the drop zone. I was on the second pass of jumpers. Most of the drop zone was a field of three-foot tall barley for a soft landing but of course I did not land at that. I landed at a very hard area of dirt but there were no injuries, so it all went good.”

In addition to coins and flags to raise money for our nonprofit, VeteransParachuteBattalion.org, Butcher was very honored to jump in with keepsakes sent to him by a WWII vet of items he had with him during the war.

A friend of Butchers that he had served beside in the U.S. Border Patrol met him at the drop zone with the beer. A drink that was well deserved after his completed mission.