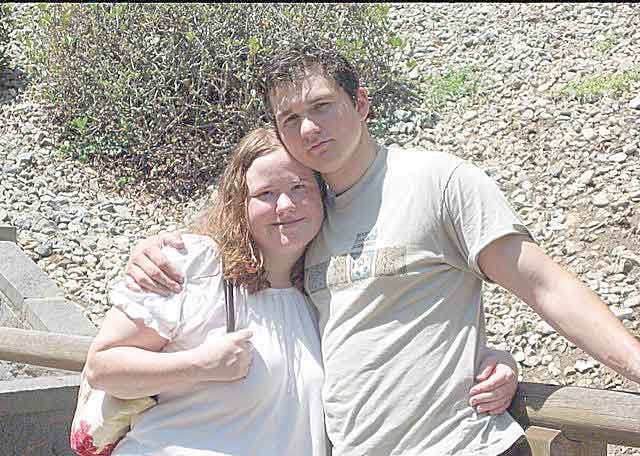 Stephanie and Zach Griffith shortly after being married in 2003. 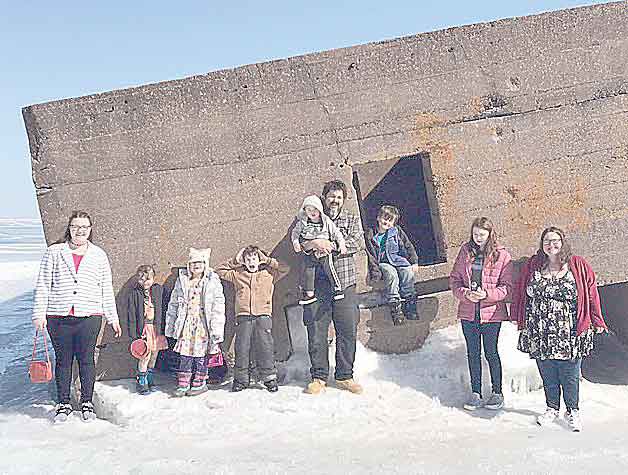 Stephanie and Zach Griffith shortly after being married in 2003.

Valentine’s Day is quickly approaching. It is a day traditionally filled with flowers, chocolates and cards. It is also a good opportunity to reflect on the reasons your heart originally leapt for your loved one. An Amery couple with a very untraditional love story is proof that you never do quite know when you will be hit by Cupid’s arrow.

Stephanie Smith was a young lady from the Midwest, making her way through life in Pasadena, California in 2003, when a chance encounter started the first page of an endearing and fast-paced love story.

She was having vehicle troubles when a security guard at her apartment’s parking garage, Zach Griffith, offered assistance. “I had a van that was one year older than me, a ‘77 Dodge, and it was pretty unreliable. Well, reliably unreliable, anyway. I had named it after my sister because neither of them liked waking up in the morning. He helped me jumpstart my van, and we started talking,” she said.

Sparks flew immediately, thankfully not from the van, but instead from their hearts.

She said, “We made plans for him to come over after work, and we ended up at Blockbuster Video. We rented every Monty Python movie ever made and stayed up all night, watching movies and talking, until we both had to work in the morning.”

Smith was a little skeptical about forming a relationship as she was 24 and Griffith was 20. She said, “I almost wouldn’t date him because he was so young, but he was cute, so I relented.”

They had quite different backgrounds. She grew up in the Twin Cities with her parents and sister, in a white-collar family. He grew up on a farm in rural Indiana with his father and three brothers, until his teen years, when he moved to Los Angeles to live with his mother. His dad was a farmer and a carpenter. Today, Zach says he relates more strongly to his years on the farm than his time in L.A. The move to California was a major culture shock for him.

In the days after meeting they found they were head over heels infatuated with each other. The couple said the day after they first hung out together, Griffith wanted to see Smith. He didn’t have a car, and she lived about 7 miles away. He had planned on biking, but on the way his tire blew. He walked the rest of the way to her apartment just to spend a couple of hours together before she went to work.

Like the old song says, like a horse and carriage, love goes together with marriage. Smith and Griffith wasted no time. “The first time I met him I asked him his name, and mentally tried on his last name. We first discussed marriage three days after our first official date. We were joking around that 03/03/03 would be a great anniversary date, because you’d always remember it. Somewhere along the way it stopped being a joke and started being a plan,” said Stephanie.

The two were married one month and one day after they first spent time together and 18 days after they officially started dating. Stephanie said, “Neither of us had a working vehicle, we were both under 25, and I had an out of state license so we couldn’t even rent a car to get East L.A. and get the marriage license. Then I figured out that we could rent a U-haul and we rolled up to the L.A. County marriage bureau office in a moving truck.”

Marrying for love may be a bit risky, but it is so honest that God can't help but smile on it. The couple went begging at churches for someone to perform the marriage ceremony, and finally found a church down the street from her apartment that agreed to do it. “Bless that pastor, he didn’t even charge us anything,” said Stephanie.

Three friends attended and two of them were pretty sure Smith and Griffith we were playing a practical joke on them. Afterwards they went to the restaurant where Stephanie worked at for the reception. She said, “Zach and Charlie, the best man, made jokes about Zach killing Charlie if he ate the whole cake. Consequently most of our wedding pictures are of Zach and Charlie pretending to kill each other over the cake with various kitchen implements.”

Stephanie’s dad found out through the grapevine and called her to ask me if she was pregnant. She assured him she wasn’t, although she doesn’t think he fully believed her until the couple’s daughter was born six days after their first anniversary. She said, “He told me to call my mom. I did, and she told me, ‘Stephanie, I am in the middle of Target right now, and I can’t say what I want to say to you right here. I will call you when I get out.’ I was pretty terrified.”

Stephanie’s mother was much nicer about it than she expected and she flew out to California meet her new son-in-law. “We went out for dinner and being basically still a teenage boy, the first thing he did was order two entrees, one of them a five egg omelet with ham, bacon, and sausage covered in blue cheese salad dressing and gravy. He tried to order turkey gravy as his beverage. My mom told me afterwards that she liked him, in spite of herself, but that she didn’t think she could ever watch him eat again,” Stephanie said.

Nothing worthwhile in life is usually easy and early years for the couple were difficult. Stephanie said, “They were really hard, actually. We were still madly in love, but it we hadn’t exactly done things the ‘right’ way. We lived in a very expensive city, and both had to work more than one job. I got pregnant three months after our wedding, on our honeymoon, in rural Arizona, camping with his dad, who was prospecting for gold there at the time. I felt woefully unprepared for parenthood. I was an impetuous daydreamer of a kid, and my husband was barely out of high school. We went to Santa Barbara and I sat down in the chapel of the mission and prayed that somehow, God would make us ready. Thankfully he did.”

Throughout the years the two have been blessed with seven children. Currently Cheyenne is 15, Isabella is 14, James is 10, Travis is 8, Charlotte is 7, Veronica is 5, and Colin is 3.

The couple has lived in Los Angeles, White Bear Lake, New Brighton and now Amery. Stephanie said, “I had been familiar with Amery because my grandma had owned a clothing shop, Barb’s, here in town. My mom grew up in St Croix Falls, and my Grandpa was from Ubet. My uncle, Roger Bergstrand was from Amery. We decided we wanted to move out to the country, and I knew this area was where I wanted to be. I started looking for houses and found the old Poor Farm for sale. Zach is an electrician, and more practical than me, so I knew if he saw all of the work it needed he would be hesitant.”

She decided to take her friend, Mary to see it with her, so she could formulate her sales pitch to Zach. “Mary is the kind of friend who is supportive, but realistic, so I knew she could help me. We just told him we were going out for a girl’s day out, and toured the house. Afterwards we went for ice cream at Ellie’s and she raised all of the logical objections, so I could come up with solid replies. I knew if Mary bought my answers, Zach would too. It worked. I was able to convince him, and here we are,” she said.

When it comes to the best and hardest parts of married life, the couple said they

are both really stubborn, which is easily the hardest part. “That and his snooze button habit. Honesty, who needs an hour of snooze button time? Just wake up already,” she said.

They feel the best part is that they are still crazy in love. She knows that he has her back no matter what, and he knows that she would have his. She said no one in the world knows her as well as he does, and he loves her for exactly who she is, the good and the bad. “I feel the same way about him. He is amazing at listening to me, and works really hard for our family. I am extremely blessed to have him,” Stephanie said.

As far as advice for their children about married life someday, Stephanie said, “Don’t be afraid to love your spouse, and remember that love is an action and a choice, not a feeling.”