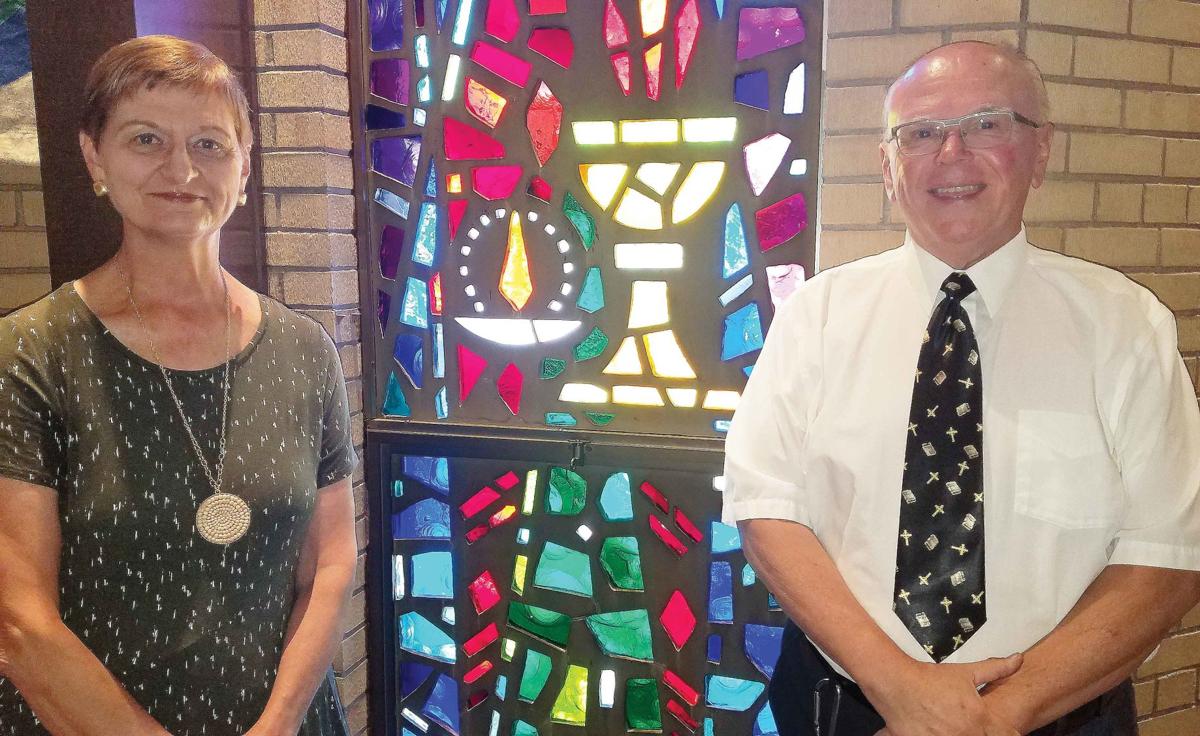 What started as a leap of faith, turned into a long life of pastoring at Amery’s Congregational Church for Barry Schaefer. After 35 years with the congregation, he is joining his wife Joyce in retirement. 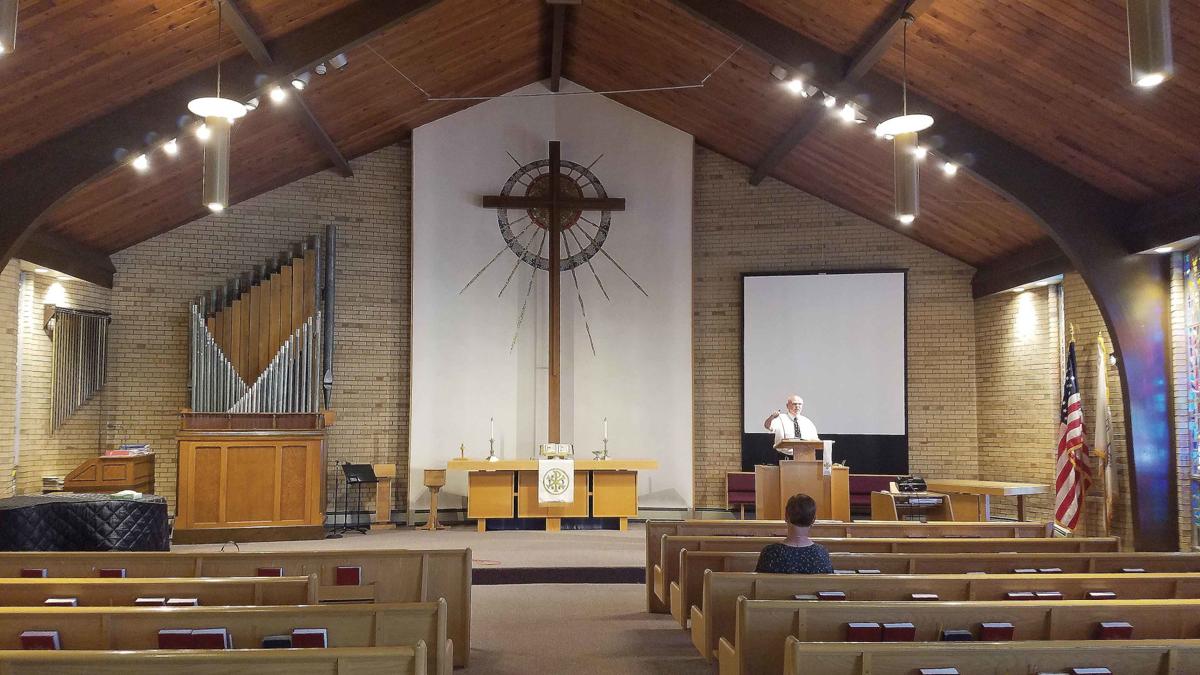 If only the walls of Amery’s Congregational Church could speak, they could repeat 35 years of inspiration from Pastor Barry Schaefer that his wife Joyce has heard from her spot in the pews. Schaefer’s last service is July 5th. 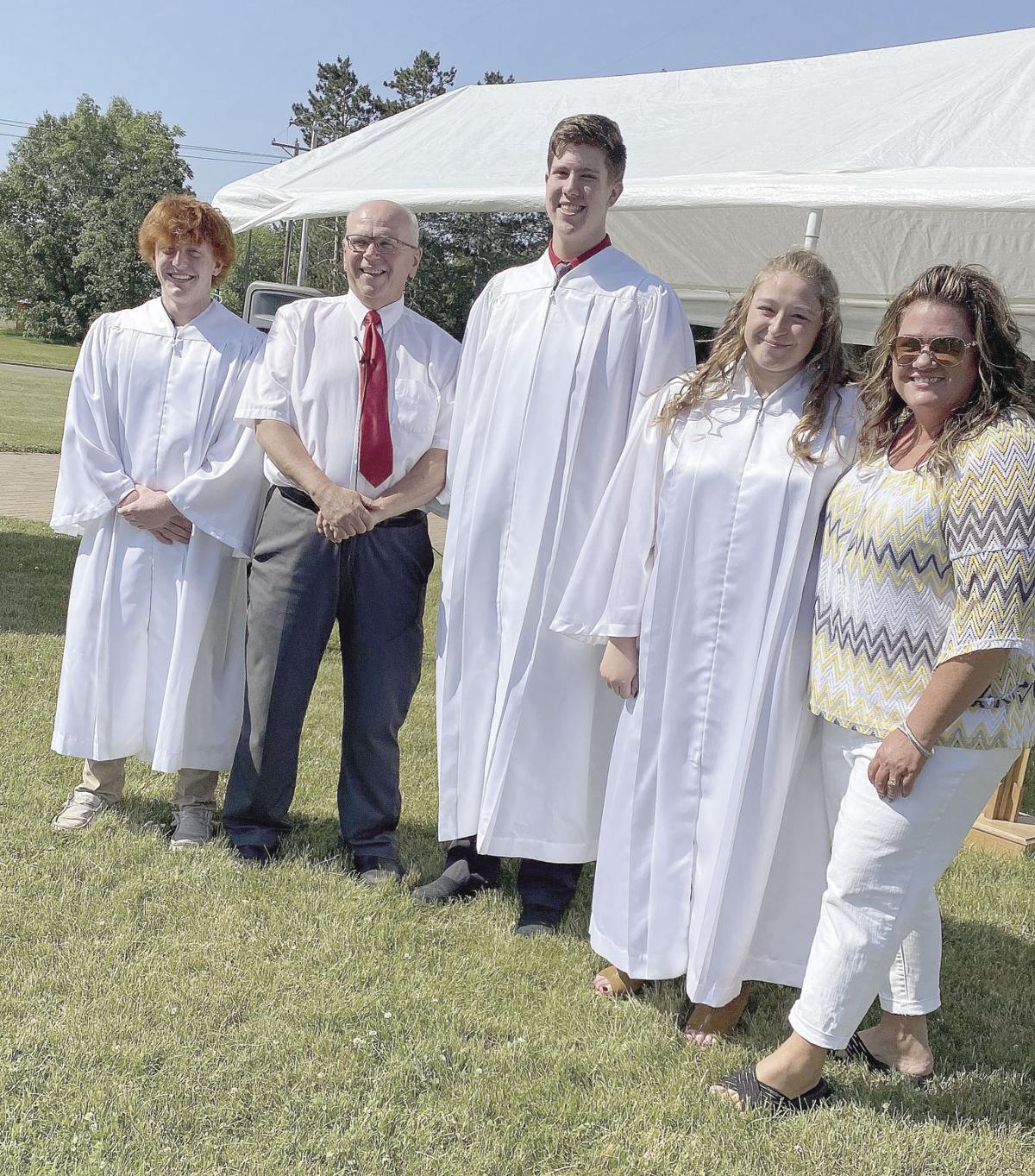 What started as a leap of faith, turned into a long life of pastoring at Amery’s Congregational Church for Barry Schaefer. After 35 years with the congregation, he is joining his wife Joyce in retirement.

If only the walls of Amery’s Congregational Church could speak, they could repeat 35 years of inspiration from Pastor Barry Schaefer that his wife Joyce has heard from her spot in the pews. Schaefer’s last service is July 5th.

Nov. 11, 1985, Barry Schaefer stood before the attendees of Amery’s Congregational Church as their new pastor. His wife Joyce was by his side with 4-year-old daughter Kelly and newborn baby Erin in tow. For the next 35 years he led that congregation through many journeys. He provided strength during moments of sadness and passionately celebrated life’s triumphs with not only the members of his church family, but the entire town.

July 5, will be Schaefer’s final day as he is entering the next phase of life…retirement.

Previous to arriving in Amery, the couple had been residing in Palos Park, IL., 18 miles outside of the Chicago Metro area. There, Barry enjoyed life as a youth minister for a large congregation, but he was looking to find a place to be a pastor of a church and  he liked the notion of Wisconsin. This was  good because Wisconsin is exactly from where his calling came.

Barry explained when you are a pastor, you are not placed, you are “called.” He said the denomination plays as a matchmaker of sorts by connecting congregations and pastors. “It’s like E-Harmony,” said Joyce. “Let’s call it C-Harmony for clergies and churches,” laughed Barry.

He said he received a phone call from Lloyd Chistiansen, who said the Congregational Church in Amery was interested in meeting him. The rest they say is history.

Joyce confided she was a little unsure about moving to such a small community. It was trust and faith that eventually made her jump on board. “I said to Barry, ‘I trust you and if this is where you feel you are being called to go, then this is where we go.’”

She told him she would come to Amery, but when she was done obtaining her master’s degree, she would get to decide where the family would live, as up until that point, it had been his choice. “35 years later, here we are. I guess I never chose to go somewhere different because this church and this town became our family.”

The Schaefer’s actually family members lived in other states and they found comfort in the connections they made with community members in Amery.

Christiansen, who had made that first call to Barry ended up being a dear friend to the Schaefers. He and his wife Billie as well as Don and Ginny Nelson, are some of the first people they formed a bond with after moving to town. Barry said he would add Rodney Eklund to that list. “Amery is filled with a cast of wonderful characters that I have had the wonderful privilege of getting to know.”

Eventually Joyce’s mother, sister and brother-in-law and Barry’s father moved to Amery too.

There have been many big moments during Barry’s long career at the Congregational, but when put on the spot he said the top three would be the church’s Block Party, building project in 1993 and he said, “My third week on the job, it’s minus 12 and the in-floor heat erupted, water spewing and we had no plans or funds. We worked through those things.”

With a giggle he said he had to give a shoutout concerning the ’93 building project to Duane Luehman, who was the carpet purveyor of the region. Barry said, “He told us he was going to get us the best carpet. At the dedication we had for the project, poking fun at Duane, I said my job was going to be to wear that carpet out. But guess what? He gave us too good of carpet. I have tried to wear it out, but I can’t that stuff is amazing!”

When Barry initially made the decision to retire quite some time ago, there was no way to know that something called COVID-19 would change day-to-day life and that all of the “lasts” he had expected to experience before his final service in July, would all look quite different. He did not know when he shared his service with the congregation mid-March, within the walls where so many words had been shared, it would be his final in that sanctuary. “The virus has cost me Lent, it has cost me the Lamb dinner, Easter and the Mission trip. We did pull off Confirmation, but in a whole different format. When you start counting the cost, this has been a very costly pandemic for many,” he said.

The Congregational has begun meeting outside on Sundays for outdoor service.

Joyce said she has been praying for the weather to cooperate July 5, for her husband’s last service, as they have no plans made should it rain.

He said, “The entire focus of my life and career has been this church. It was also hard to consider life after pastoring,” said Barry.

He said for many people when they decide to retire, they walk in and tell their boss they will be done on a certain date. “Pastoring in many ways is like dairy farming, it becomes your life. Every aspect of your life is somehow intertwined in the pastoring. For me retirement was not just stopping coming to work, it was leaving a whole lifestyle behind,” he said.

“The irony is Joyce and I have to go church shopping, outside of Amery. The way our denomination does it, we have to become completely disengaged with the congregation,” said Barry. He said in order to be ethical; they have to go far enough away where others they worship with are not a part of the Amery community. Barry said, “That is a daunting task,” he said.

Barry said, “The church needs to be free to chart its next new direction.”

Joyce said, “When I retired it really did not affect Barry. There were times I was pushing him to join me in retirement, but in the last couple of months I have really understood how much this is affecting me,” said Joyce with tears falling from her eyes.

Barry said his years at the Congregrational Church have been a complete intermeshing of his and his family’s lives with the others in the church, so the decision to leave is hard on him, Joyce and their grown daughters. “Now to just pull out, can really feel you leaving like you have ragged edges,” he said.

The Schaefer’s daughter Kelly Stansbury said, “When I stop and reflect over the past 30 some odd years of what it meant to grow up in a house with your dad as a pastor, there are many different things that come to mind. Perhaps the fondest memory I have though, is a very personal one where I was blessed to be able to have my dad baptize my son, Liam with my “Pops” on one side and my husband via Skype (he is in the military) and my dad in front of us. In that moment I watched my dad baptize the newest Christian into our faith as a pastor and the proudest grandpa carry his grandson down the aisle to show off to everyone present.”

Kelly said, “Through all of these memories, there has always been the same message ringing true which is that of dedication and serving others, which is the greatest lesson I have learned from my dad and will keep with me for a lifetime. As this chapter comes to a close I’m reminded of Psalm 90: 16-17:  Let your work be shown to your servants, and your glorious power to their children. Let the favor of the Lord our God be upon us, and establish the work of our hands upon us; yes, establish the work of your hands!”

Daughter Erin Stewart said, “Being a ‘PK’ (pastor’s kid) wasn’t so bad after all. One of my fondest memories was my dad was able to walk me down the aisle as my dad, and then turn around and be my pastor and perform the marriage ceremony for Aaron and I; what a special experience that was. Over the years he has not only taught, but showed, us how to be a servant for Christ. I am most grateful for how he always made God known in our family. I know that many can say they have a relationship with God because of his servant leadership. ‘Whatever you do, work heartily, as for the Lord and not for men, knowing that from the Lord you will receive the inheritance as your reward. You are Serving the Lord Christ,’ Colossians 3:23-24.”

Erin said, “I have only one tip for you in your retirement: you should fill your time being surrounded with your eight grandkids.”

As for wishes for her dad in retirement, Kelly said, “May it be filled with endless tractor rides with grandkids, little boys wanting their Papa to watch YouTube videos of trains with them, and little girls who want their Papa to paint their fingernails and play dolls.”

Barry plans for retirement certainly do include more time with his daughters, sons-in-law and grandchildren who live in other states. Barry intends to fully dive into the hay growing business. He will also continue his work as Chaplin for the Polk County Sheriff Department.

In closing, when asked what his one accomplishment for which he is most proud over the past 35 years, he said, “It is not something that happened on a specific date, but instead an amalgam of being involved in the process where persons are led to faith in Christ.”